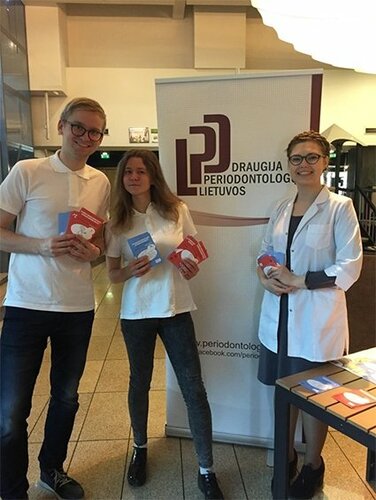 The Lithuanian Association of Periodontology handed out leaflets in shopping centres in major cities to draw attention to the dangers of periodontal disease and its links to systemic diseases.

The leaflets featured attractive graphics highlighting the problems caused by periodontitis, with the headings “Missing teeth, bad breath? Is he still Prince Charming?” and “If Cinderella lost a tooth would Prince Charming still be looking for her?”

They were handed out to the public by dental students who volunteered to be part of the May 12 awareness day’s activities. The leaflets were also shared by the society’s Facebook page.

Many members of the public asked questions when they were given the leaflets. Some people had never heard about periodontal disease, some asked if could be caught by kissing, while others thought that it was just a normal part of growing old.

“We feel that this initiative is more than necessary and raising awareness can help us to better fight periodontal diseases in the future – but we also think that we are at the very beginning of a very long road,” said Jūratė Žekonienė, president of the Lithuanian Society of Periodontology.

The society also brought the message about gum health and its importance to general health to students (15- to 19-years-old) in several high schools in Vilnius.