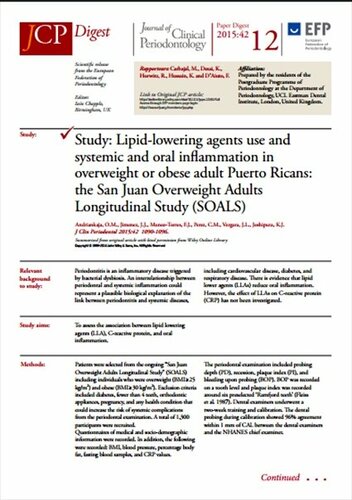 Research suggests evidence of an association between the use of lipid-lowering agents (LLAs) and a reduced level of periodontal inflammation, as measured by bleeding on probing (BOP).

A study to assess the association between LLAs, C-reactive protein, and oral inflammation was carried out by researchers at the School of Dental Medicine at the University of Puerto Rico. A summary of their findings was published as JCP Digest 12 (2015:42).

While there is evidence that lipid lower agents (LLAs) reduce oral inflammation, the effect of LLAs on C-reactive protein (CRP) had not previously been investigated.

Among the results of the research, LLA-using participants had lower BOP and lower hs-CRP levels in comparison with non-users and LLA-use was associated with lower percentage of patients suffering from moderate or severe periodontitis.

The researchers cautioned that BOP is a surrogate marker of inflammation, so it was not clear from the study whether LLAs affect inflammation or bleeding only.

Concluding that the data provided evidence of an association between the use of LLAs and a reduced level of periodontal inflammation (as measured by BOP), the researchers said that further investigation in this area was needed “to ascertain whether this association is causal and reversible and of clinical significance.”

JCP Digest 12 is available in English, with versions in French, German, Italian, Portuguese, and Spanish to be published soon.