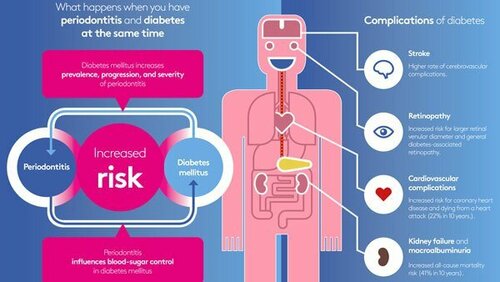 The EFP marks World Diabetes Day on November 14 by issuing a reminder of the important links between periodontitis and diabetes and emphasising the need for dentists and doctors to work together to combat both diseases.

“The link between periodontists and diabetes is bi-directional and well established,” said EFP president Filippo Graziani, who gives a lecture on perio and diabetes to the Portuguese Dental Association in Lisbon on November 14.

“Our joint guidelines with the International Diabetes Federation (IDF) indicated clearly that it is now time for doctors and dentists to work together for the good of the patients.”

On top of that, controlling diabetes is more complicated when a patient also has periodontitis, and people with both diseases are at greater risk of suffering some severe medical complications – including cardiovascular disease, chronic kidney disease, and retinopathy – than people who have diabetes alone.

But the good news is that periodontal treatment in people with diabetes can lead to a significant reduction in their glycated haemoglobin (HbA1c) levels.

EFP project on perio and diabetes

On November 14 last year, the EFP launched its Perio & Diabetes outreach project – a package of written and graphic materials aimed at different audiences.

The core of this project is the six recommendation guidelines specially produced for different dental professionals, other medical professionals, researchers, policymakers, patients and the public, and the media. There are also shorter brochures, lively infographics, and an animated video.

This animation, explaining the key messages about the links between periodontitis and diabetes, has now been translated into seven languages: Chinese, French, German, Italian, Japanese, Portuguese, and Spanish. A version in Georgian is due to be added soon.

The Perio & Diabetes project was produced thanks to an unrestricted grant from EFP partner Sunstar, and the material is based on the findings of the Perio-Diabetes Workshop, held in Madrid in February 2017, which was organised jointly by the EFP and the International Diabetes Federation (IDF), in partnership with Sunstar.

Since the project’s launch, EFP-affiliated national societies of periodontology have used the materials, both in their original format and translated.

Various societies – including those of Hungary, Norway, Morocco, Poland, and Russia – used material from Perio & Diabetes in their activities for Gum Health Day 2019 on May 12,

Research related to periodontitis and diabetes published recently in the EFP’s Journal of Clinical Periodontology includes: