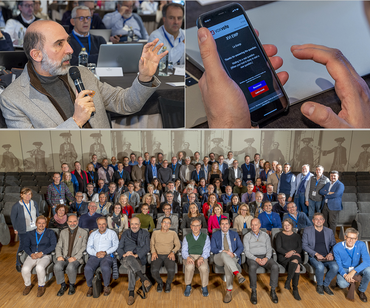 A three-day EFP-led workshop, which brought together 90 experts from 19 countries, concluded on Tuesday, November 12 with a consensus agreement on a new guideline on periodontal therapy.

Perio Workshop 2019 (also known as the XVI European Workshop on Periodontology) evaluated 15 systematic reviews on different therapeutic interventions, as participants worked intensively to create a new formal guideline on periodontal therapy that meets the requirements of the S3 level of clinical-practice guidelines (the highest level).

The guideline will provide dentists and other oral-healthcare professionals with precise therapeutic pathways, based on the patient’s diagnosis, and recommendations on specific interventions to treat the different stages of periodontitis.

“Once again the European Federation of Periodontology has taken the lead on developing an evidence-based guideline to facilitate an updated and predictable periodontal care across Europe and beyond”, said Mariano Sanz, chair of Perio Workshop 2019.

"This guideline will ultimately benefit the patient who would receive the best possible treatment under the provisions of this guideline."

Participants in the workshop – in total, 80 experts in periodontology and 10 representatives from relevant scientific societies and organisations in European dentistry, from 19 different countries –met at La Granja de San Ildefonso in central Spain.

Because of the specific requirements of the S3 level of clinical-practice guidelines, in addition to European and international experts, representatives from key European stakeholders participated. From European scientific societies in other areas of dentistry: the European Society of Endodontics, the European Prosthodontists Academy, the European Federation of Conservative Dentistry, the European Association of Dental Public Health, and the European Dental Hygienists’ Federation.

From other important stakeholders in European oral care, the Council of European Dentists, the European Association of Chief Dental Officers, the European Platform for Oral Health and the European Federation of Dental Students.

For the first time at Perio Workshop, participants had to vote on the content of the document and on each of the consensus recommendations for the different therapeutic pathways. The electronic voting process allowed for a transparent identification of each of the votes and the level of consensus achieved (more than 75% agreement was required for accepting a recommendation),

The scientists at the workshop were assisted by Ina Kopp, a German expert in creating guidelines.  In January, she led a training session in Frankfurt on writing guidelines in line with European legislation, which was attended by EFP experts including the co-chairs of the workshop’s four working groups.

The workshop’s participants evaluated not only the class of evidence behind the different treatments, but also agreed upon a level of strength for recommending these interventions, taking into consideration other elements, such as:

The guideline agreed at La Granja will be published in the Journal of Clinical Periodontology in the coming months and then there will be a multi-stage implementation. The EFP will lead a dissemination strategy with a communications campaign to implement these guidelines throughout Europe and beyond.

The guideline does not include recommendations for therapy in relation to periodontitis stage IV, which will be the focus of Perio Workshop 2020 in November 2020.