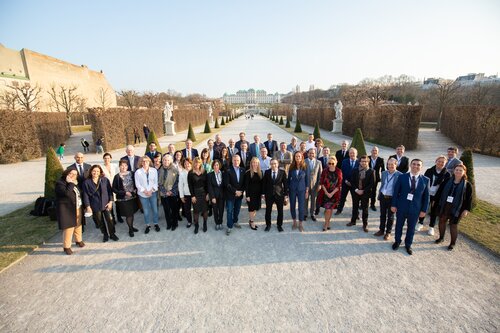 After two years in which the Covid-19 pandemic obliged the EFP to hold its annual general assembly (GA) in online form, there was much delight in being able to hold an in-person meeting this year.

The general assembly, preceded by the half-yearly meeting of the executive committee and other committee meetings, took place in Vienna, Austria, on 26 March.

Key points from the meetings were:

“When I became EFP president, my wish was that my year would be ‘return to normal’ and, despite the difficulties, I insisted on having an in-person general assembly, which was more than successful!” said Lior Shapira. “One of the important events during the GA was the launch of an EFP donation campaign to support the medical need of the Ukrainian people and their refugees (in collaboration with WHO Foundation).

“We also launched the commemorative magazine on the EFP’s 30th anniversary and promoted EuroPerio10 – already 6,000 people are registered for the congress!  It was an honour and pleasure to serve the EFP national societies as president, and I look forward to seeing everyone in Copenhagen during EuroPerio 10.”

“I am so pleased that this year we returned to a face-to-face GA meeting and could greet everyone in person,” said EFP secretary general Nicola West. “While online meetings have their place in our sustainability strategy, face-to-face meetings are essential for our business to operate, creating energy, warmth, and friendship, which cannot be underestimated.

“The pandemic has made the world realise the importance of human contact. Touch and displays of warmth are crucial to our survival, and throughout the whole meeting you could feel a wonderful ambient atmosphere of EFP friendship.”

She added: “I feel honoured and privileged to be given the opportunity to serve the EFP as secretary general for a second term and thank everyone for their confidence and support.”

New president Andreas Stavropoulos commented: “All GA delegates were very pleased to finally have a meeting IRL (“in real life”) and meet friends from all Europe, and beyond. There was a very nice atmosphere during the entire GA business meeting. The few sensitive issues were debated in a very respectful and friendly way, according to the EFP family spirit.”