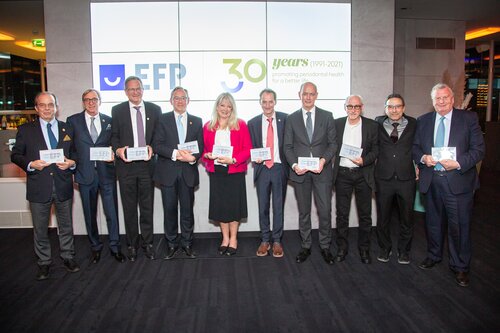 Several awards were given at the EFP general assembly, held in Vienna on Saturday 26 March.

The Eminence in Periodontology Award was given to Iain Chapple (UK), who has served the EFP in many capacities including secretary general (2016-19), treasurer (2007-13), and chair of the scientific affairs committee (2013-16).

Iain Chapple is professor of periodontology and head of research at the Institute of Clinical Sciences, College of Medical and Dental Sciences at the University of Birmingham. He is also a consultant in restorative dentistry at Birmingham Community Healthcare Foundation NHS Trust.

“The highlight of my research endeavours was being awarded the IADR Distinguished Scientist in Periodontal Research in 2018, but this award from the EFP is the highlight of my career and is very, very special because it comes from incredible colleagues and friends,” said Prof. Chapple.

“It is something I never imagined achieving and I don’t believe I deserve it, because my years of work for the EFP have just been a huge privilege, a lot of fun, and you don’t work for the EFP for recognition, you do it because of what and who the EFP represents.”

Prof. Chapple received his award at a dinner in Vienna after similar awards from the 2020 and 2021 general assemblies – which had been held online because of the Covid-19 pandemic – were presented. Mariano Sanz (Spain), received the Eminence in Periodontology award he was granted in 2020, while Frances Genco was handed the international Eminence in Periodontology award, conferred posthumously on her late husband Bob Genco in 2019,

“To receive this in Vienna in the same evening that my dear friends and colleagues Bob Genco and Mariano Sanz were similarly honoured was just incredibly humbling and I could not find any words at the time,” Iain Chapple added. “However, now I would just like to say ‘thank you’ from the bottom of my heart to the EFP and to my wife Liz and daughters Jess and Tasha for all the evenings and weekends away.”

The Eminence in Periodontology Award is given in recognition of outstanding service to the EFP and contributions to the understanding of the field of periodontology and the diagnosis and treatment of periodontal diseases. It has also been awarded to Ubele van der Velden (Netherlands) in 2013 and Gianfranco Carnevale (Italy) in 2014.

The Distinguished Scientist Award was given to Henri Tenenbaum (France), who was the director of the EFP accredited postgraduate programme in periodontology at the University of Strasbourg (2010-19). This award is given in recognition of outstanding contributions to the understanding of the field of periodontology and the diagnosis and treatment of periodontal diseases.

The Distinguished Service Award went to Joerg Meyle, former EFP treasurer (2013-19) and president (2007-08). This award is presented to a member of one of the EFP-affiliated national societies of periodontology selected for distinguished service to the EFP in more than one area over a period of at least 15 years.

"I am very pleased to receive this prestigious award in appreciation of my activities in various missions in the EFP and as an EFP board member," said Joerg Meyle. "I thank the board and the president for their decision. To receive this award means a great honour to me!"

An additional award was given to Nairn Wilson to honour his work in seeking EU-wide recognition of periodontology as a speciality within dentistry.