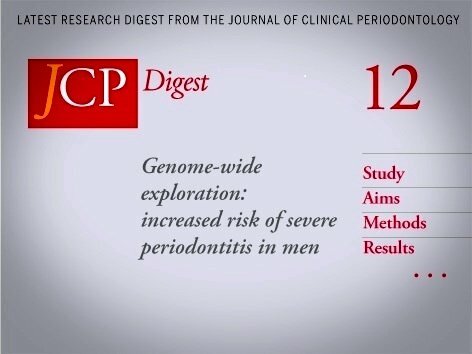 JCP Digest 12, the latest issue of the EFP’s research summary, is now available for download in pdf format, offering a summary of a study of whether there are sex-specific genetic effects that increase the risk of severe periodontitis in men.

The research involved a genome-wide association study of 329 German patients with AgP versus 983 controls. The SNP with the strongest gender association in AgP was further tested in an independent replication study of 382 AgP cases against 489 controls.

The study's authors, whose full research paper was published in the December edition of the Journal of Clinical Periodontology (JCP), concluded that an associated intergenic region of 140-kb, situated upstream of the gene neuropeptide Y (NPY), conferred an increased risk for aggressive periodontitis in men but a decreased risk in women. In the replication study, this region showed strong linkage disequilibrium upstream of NPY and also displayed a gene-gender interaction.

The researchers added that “the introduction of gender-stratified analysis may be important for the analysis of future genome-wide association studies.”

You can read the JCP Digest issue 12, which is available in Spanish, French, Italian, German, and Portuguese.

The original paper was précised by post-graduate periodontology students at the Department of Periodontology, Eastman Dental Institute, University College London. Every month, the EFP publishes a digest of a highly relevant research paper from the JCP. Access all the published editions of JCP Digest by clicking here.