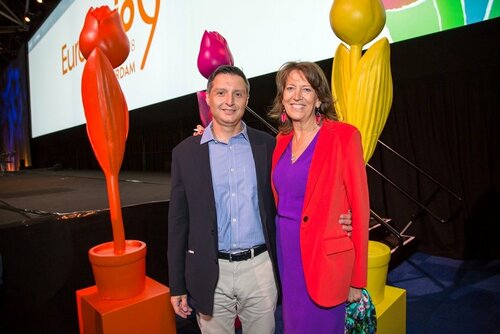 EuroPerio9 came to a spectacular close on Saturday 23 of June with a special ceremony at the RAI Amsterdam concluding four intense days in which periodontal science and clinical practice took centre stage in an international celebration of periodontology and implant dentistry that broke EuroPerio records.

For congress chair Michèle Reners, “The atmosphere of EuroPerio9 was really relaxed and friendly, no stress at all, and the venue was also a part of this feeling – close to the city and full of daylight. Also, the sessions were very realistic and the feedback from the attendees very positive – they were really satisfied. EuroPerio9 has reached its goals and even more!”

For the first time ever, a EuroPerio congress attracted a five-figure number of participants, with a total of 10,232 periodontists, oral-health professionals, students, and others present at an event which featured more presentations in its scientific programme (134 in 42 sessions) than any of the previous eight EuroPerios.

With participants coming from 111 countries and 25% of delegates from beyond Europe, this was truly an international event, which reflects the EFP’s increasingly global perspective as it seeks to build alliances across the world to advance the cause of evidence-based periodontal science.

Both evidence-based research and international co-operation were to the fore at the session on Friday 22 June which may well prove to be EuroPerio9’s most lasting legacy: the News from the World Workshop session, which presented the new classification of periodontal and peri-implant diseases, agreed by consensus by a joint workshop of the EFP and the American Academy of Periodontology (AAP).

The new session formats at EuroPerio9 – such as Perio Talks, the “nightmare” session, live surgery, debate, the interactive session on treatment planning, and the Perio Contest– proved popular with delegates, who were able to participate actively in some of these sessions by using the voting facility of the special EuroPerio9 App.

Looking back over the four-day congress, highlights included:

Congress chair Michèle Reners said that among the most memorable sessions had been “the Perio Talks, the ‘master clinician’ session on saving teeth and the nightmare session.”

Søren Jepsen, scientific chair, said: “Among the sessions I enjoyed the most I can name the science movie on peri-implantitis and its prevention, where important messages were given using fascinating images. The session on live surgery was quite amazing: more than 4,500 people sitting together in total silence and concentrating on what was going on is something I had never experienced before. I think the session on the new classification of periodontal diseases was also a landmark event.”

Visitors to RAI Amsterdam were also able to take advantage of the biggest ever EuroPerio exhibition, with a total of 139 companies exhibiting, including a record number of 26 sponsors, with total space amounting to 3,763m2.

Attention now turns to EuroPerio10, which will take place in at the Bella Centre in Copenhagen from June 2-5, 2021. The organising committee – chaired by Phoebus Madianos (Greece), with David Herrera (Spain) as scientific chair and Nicola West (UK) as treasurer – was presented during the closing ceremony.

Just as EuroPerio8 in London seemed a tough act to follow, EuroPerio9 has set some very high standards for the next EFP congress.

“EuroPerio10 is a gigantic task and even a greater challenge, given the enormous success of EuroPerio9," said Phoebus Madianos.  "I would like to congratulate, yet again, Michèle Reners and the whole organising team for their unprecedented achievements in Amsterdam, and I am confident our team with David Herrera and Nicola West will follow in their footsteps to create a superb anniversary event in Copenhagen for the 10th EuroPerio.

"We have certainly learned a lot from Amsterdam and will try to identify and improve on any possible weak spots, while our top priority is rendering the highest quality scientific programme."