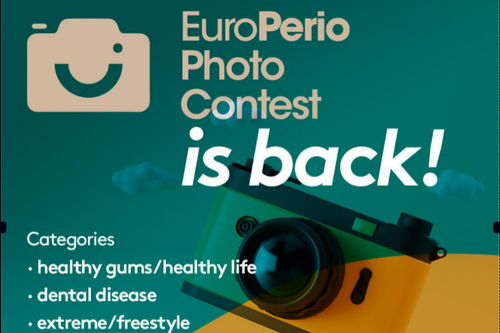 The European Federation of Periodontology is inviting members of its affiliated national societies of periodontology who are keen dental photographers to participate in the federation’s second photo contest, organised around EuroPerio10 which takes place in Copenhagen in June.

As in the 2018 contest held for EuroPerio9 in Amsterdam, photographers are invited to submit photographs in three categories: healthy gums/healthy life, dental disease, and extreme/freestyle.

The contest is being organised through the EFP’s 37 affiliated national societies of periodontology, which will select national winners in each category from the photographs submitted by their members. Participants in the contest may submit as many photographs as they like.

Interested photographers have until April 15 to submit their images to their national societies of periodontology. They also need to register for EuroPerio10, which takes place at the Bella Centre in Copenhagen on June 15-18.

The national winners will each receive an EFP photo-contest certificate, and their photographs may be published and credited in future EFP publications.

The national-winner photographs will then be presented at EuroPerio10, where attendees will be able to vote for winners in each of the three categories (neither the names of the photographers nor those of their national socieites will be displayed).

In the 2018 contest, more than 300 photographs were submitted to the national societies in the first phase of the contest, and 57 entries from 23 countries were selected for the final stage of the first EFP photo competition at EuroPerio9 in Amsterdam.

More details about the Second EFP Photo Contest, including its rules, can be found on the EFP website: https://www.efp.org/2nd-efp-photo-contest/