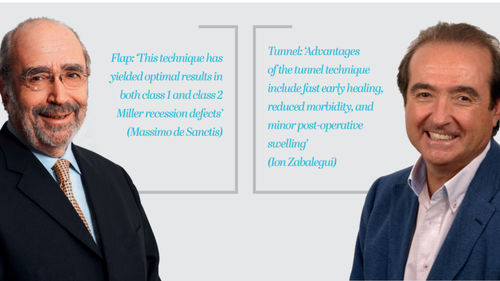 At EuroPerio9 in Amsterdam in 2018, the live surgery session was one of the highlights of the programme. It was performed by Dr. Giovanni Zucchelli and Martina Stefanini (Italy), and the three-year follow-up of the case was presented during the “kick-off” session of the EuroPerio Series of online education in June 2021.

Building on this success, at the EuroPerio10 congress in Copenhagen in June, there will be no fewer than three live surgeries, where expert clinicians will demonstrate different techniques in mucogingival and bone-regenerative surgery.

These two surgeons outlined the rationale for these different approaches in a debate article in EFP magazine Perio Insight, in which Dr Zabalegui said that the advantages of the tunnel technique included fast early healing, reduced morbidity, and minor post-operative swelling, while Dr de Sanctis argued that the flap technique had yielded optimal results in both class 1 and class 2 Miller recession defects.

Otto Zuhr (Germany) will chair the session, which includes a debate after the two surgeries have been performed. In that debate, Dr Zuhr will try to explain, with the help of the surgeons, the advantages and disadvantages of the two techniques, and the clinical scenarios in which each approach could be more beneficial.

On the morning of Friday 17 June, Istvan Urban (Hungary) will perform a surgery aiming at vertical bone regeneration in the posterior mandible. The session will be chaired by EFP president-elect Andreas Stavropoulos (Sweden) and, after the surgery, there will be a discussion with other experts in the field – Mauro Merli (Italy) and Cecilie Gjerde (Norway – in order to understand which protocols will provide the better results and which future approaches may be interesting to follow.

“Going to in Copenhagen, on June 15-18, is a must for all those interested in periodontology, to understand all the latest news, explained by the best specialists in Europe and around the world,” said David Herrera, EuroPerio10 scientific chair.

The deadline for “early bird” registration for EuroPerio10 – which means savings of up to 35% compared to onsite booking – is Wednesday 2 March.