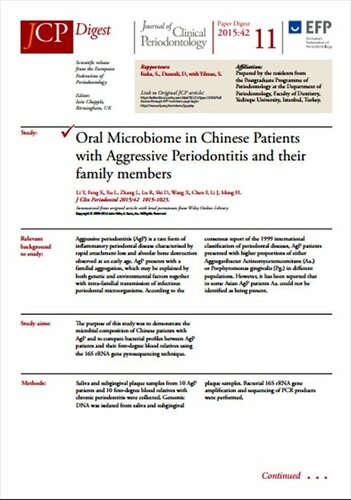 Aggressive periodontitis (AgP) is a rare form of inflammatory periodontal disease characterised by rapid attachment loss and alveolar bone destruction from an early age. It presents within families, which points to genetic and environmental factors, along with intra-familial transmission of infectious periodontal microorganisms.

AgP patients present with higher proportions of either Aggregatibacter Actinomycetemcomitans (Aa.) or Porphyromonas gingivalis (Pg.) in different populations, and it has been reported that in some Asian AgP patients the former could not be identified as being present.

A study, whose findings are summarised in in the EFP’s research summary JCP Digest, sought to demonstrate the microbial composition of Chinese patients with AgP and to compare bacterial profiles between AgP patients and their first-degree blood relatives.

The research, published in JCP Digest 11 (2015:42), showed a similar phylogenetic architecture of microbial composition in AgP patients and their first-degree blood relatives, which suggested a possibility of microbial transmission between family members. The intra-familial transmission of periodontal pathogens with the family genetic background may lead familial aggregation of AgP.  In addition, the study concluded that Pg. may be the predominant periodontal pathogen in Chinese AgP patients.

The researchers, from the Department of Periodontology, Peking University School and Hospital of Stomatology in Beijing, China, said that the findings of the study were “crucial for the treatment and prophylaxis of Chinese AgP patients.”

Originally published in the November 2015 edition of the Journal of Clinical Periodontology, the research was summarised for JCP Digest by residents of the postgraduate programme of periodontology at the Department of Periodontology in the Faculty of Dentistry at Yeditepe University in Istanbul, Turkey.

The JCP Digest is co-ordinated by Prof Phoebus Madianos and Prof. Lior Shapira, respectively chair and deputy chair of the EFP’s scientific advisory committee, with the co-operation of Prof Maurizio Tonetti, editor-in-chief of the Journal for Clinical Periodontology, and under the umbrella of the EFP’s executive affairs committee.

JCP Digest 11 is available in English, with versions in French, German, Italian, Portuguese, and Spanish to be published soon.