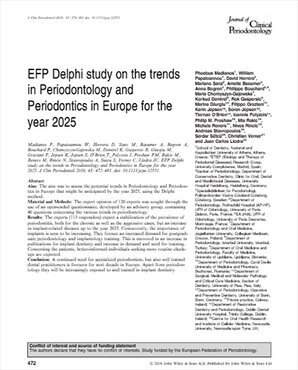 Experts in periodontology expect the prevalence of periodontitis in Europe to stabilise in the next decade while implant-related diseases will increase, despite expected improvements in surgical techniques and the quality of implants.

These are among the key findings of an EFP-funded study on expected trends in periodontology and periodontics, which used the “Delphi” method to assess the responses of 113 experts to a questionnaire on trends in the sector.

The experts surveyed also foresee increased demand for postgraduate training in both periodontology and implantology, which will be reflected by an increase in publications related to implant dentistry and an increase in demand for training.

They also anticipate that patients will become better informed and, as a result, there will be more demand for routine periodontal check-ups.

The EFP Delphi Study on the trends in Periodontology and Periodontics in Europe for the year 2025 was published in the June issue of the Journal of Clinical Periodontology.

The study’s authors, led by Phoebus Madianos, chairman of the EFP’s Scientific Affairs Committee, note the changes in professional demography, in epidemiological patterns of periodontal diseases in Europe, and in the provision of dental services that have taken place over the last two decades.

In this context, they say, there is a clear justification for carrying out a thorough analysis of the changes that are likely to take place in periodontology and periodontics in Europe over the next decade.

The study, which involved the participation of experts from across the European Union and Israel, focused on assessing likely trends in four areas in the period to 2025: periodontal and peri-implant health in Europe; publications about periodontology from European groups; training in periodontics (undergraduate, postgraduate, continuing education); the practice of periodontics.

The Delphi technique was adopted because it is a widely used and accepted method for gathering data from respondents within their domain of expertise and is well suited for building a consensus. The questionnaire used was devised by an advisory group comprising Phoebus Madianos (National and Kapodistrian University of Athens), David Herrera (University Complutense, Madrid), Mariano Sanz (University Complutense, Madrid), and Juan Carlos Llodra (University of Granada), who were among the study’s 24 authors.

The study considered the questions in relation to the European Union as a whole, and according to five different models of healthcare: the Nordic, the British, the Bismarkian, the Southern, and the Eastern.

Regarding trends in periodontal and peri-implant health, there was a consensus for the Nordic and Southern models that chronic periodontitis will have the same prevalence in 2025 as in 2015. While there was no such consensus in relation to the other models or the European Union as a whole, there was nonetheless “an overall tendency for stabilization of the prevalence of this chronic disease.”

There was consensus in all models and at the European level that the prevalence of aggressive periodontitis would stabilise and that there would be an increase in peri-implant pathologies (peri-implant mucositis and peri-implantitis), in spite of anticipated improvements in surgical techniques and the quality of implants.

In terms of education, the study revealed no consensus about the importance of periodontology compared with other subjects in undergraduate training, except for the Nordic model (where the consensus was that its importance would stabilise) and the Eastern model (where the consensus was that it would increase in comparison with other subjects). For postgraduate training, there was an overall consensus that demand would increase in relation to both periodontology and implant dentistry.

The EFP’s Delphi Study concludes that there will be a continued need for specialised periodontists and well-trained dental practitioners over the next decade in Europe and that “the two will complement and support each other without any danger for a decline in the competencies of the general dentist.”

Periodontists will be increasingly exposed to and trained in implant dentistry and universities will retain their central role in education, “but will need to expand curricula to include and expand training in implant dentistry,” for both undergraduates and postgraduates.

“Despite individual differences among healthcare models, this Delphi study overall predicts a central role for periodontology and periodontics in European dentistry, beyond the next decade,” said Phoebus Madianos.

“The foreseen demand for increased specialised periodontal and implant care emphasises the need for high-standard postgraduate as well as continuing-education programmes across Europe, which is one of the main strategic objectives of the EFP.”