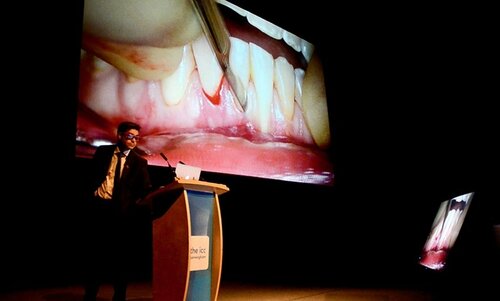 The British Society of Periodontology (BSP) has hailed as a great success the PanDental Society Conference which took place in Birmingham in November.

The meeting, which took place at the Birmingham International Convention Centre, was the third joint meeting of the four societies, following previous PanDental conferences in 2007 and 2011.

The event on November 11 and 12 featured an international line-up of speakers and a large trade exhibition. On the first day each society held sessions in parallel and there was a themed plenary session on the second day.

The theme of this year’s meeting was surgery, following the topics of complex treatment planning and trauma that were discussed at the two previous conferences.

“We considered live surgery which we thought would be too risky and early on decided to try to get the surgery filmed in 3D,” said BSP president Phil Ower.

In January 2016, the Milan-based digital-communications specialists GDS Communication filmed three surgeons (periodontal, endodontic, and restorative) performing surgery in London and Manchester and captured a variety of procedures in 3D.

The GDS team returned to the UK for the meeting in Birmingham, bringing with them all the equipment for the 3D presentation: the projectors, the screen, and 700 pairs of 3D glasses.

“The 3D presentation was a huge success and the image quality stunning,” commented Dr Ower.

“The 3D surgery was exceptional,” “The 3D videos were jaw-dropping,” and “one of the best conferences I have attended” were among the comments received by organisers about the event.