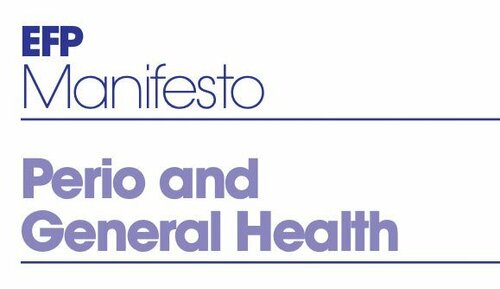 The EFP Manifesto “Perio and General Health" is a call to action for the prevention, early detection, and treatment of periodontitis.

Based on the conclusions of the IX European Workshop in Periodontology, held in 2012, the Manifesto was the first formal declaration in international dentistry to condense years of research into the links between periodontal disease and systemic illnesses into an acknowledgement of periodontitis as a major public-health issue.

The EFP Manifesto also covers the links between periodontitis and diabetes, adverse pregnancy outcomes, and other diseases.

The EFP invites individuals, companies. and institutions involved in health care, to sign the manifesto and thereby support a mission to bring benefits from periodontal care to the general health of individuals and society.