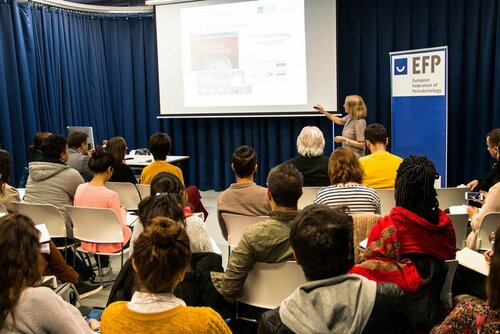 The EFP is working with one of the world’s leading design schools in a project to produce a new logo that can be used by the federation’s partners and to support an awareness campaign.

The idea is to create materials that the EFP and its seven partners – Dentaid, Oral-B/P&G, Sunstar, Johnson & Johnson, Colgate, Geistlich Biomaterials, and GlaxoSmithKline (GSK) –  would be able to use to promote awareness of periodontal health and oral hygiene.

The EFP is working with the Istituto Europeo di Design (IED), which will include the development of the awareness campaign and logo as a module in the master’s degree in design and innovation at the institute’s Madrid centre.

The 32 students involved, who come from all around the world, will work in six different teams to develop an oral-hygiene awareness campaign and define an appropriate communication strategy and personalised branded identity to promote periodontal health, general oral hygiene, and the EFP’s reputation as the leading scientific voice on periodontology and implant dentistry.

The EFP module at the IED runs from now until May, after which the students will present the six awareness projects and logos to EFP president Gernot Wimmer and secretary general Iain Chapple who will choose the best one.

The creators of the selected project will be invited to give a presentation at EuroPerio9, where the students will be able to meet partners from the dental industry.

The EFP gave the IED a brief that emphasised that the branded identity and campaign messages should be “engaging, inspirational, and compelling.”

The project should lead to the creation of material for a general EFP awareness campaign, including a logo that the partners would be able to use on their oral-hygiene products – not as an endorsement but as a statement of their EFP partnership. It was made clear that the EFP is not looking for a product-endorsement logo and that the campaign and its materials must be focused on general messages about oral health and healthy lifestyle.

There is no obligation on the EFP to use the outcome of the students’ work. However, working with the IED will not only lead to the creation of suitable material but will also give the EFP contact with exciting young designers who may be able to help in future communications projects.

On February 12, EFP head of operations Sharon Legendre and David Herrera, the EFP delegate for the Spanish Society of Periodontology (SEPA), gave a presentation to the IED students. The presentation explained what periodontology is, what the EFP is and what it does, and what the federation is seeking to achieve through its collaboration with the institute. Students were presented with all the current EFP logos and the federation’s strategic plan.

Prof Herrera gave the students a presentation about periodontology and periodontics in which he explained gum diseases (gingivitis and periodontitis), their importance and consequences (at an oral level, in quality-of-life indicators, for systemic health, and for public health), as well as the benefits of prevention and therapy. During the debate, the lack of awareness in the general population was highlighted.

Sharon Legendre explained how the EFP’s key priorities were the promotion of research, education, and awareness of periodontal science and practice. She explained that the EFP is a federation of 30 national societies of periodontology, and highlighted its key activities such as EuroPerio9, Perio Master Clinic, Perio Workshop, the accredited postgraduate programmes, and European Gum Health Day. She also described the range of EFP publications and the new projects with the federation’s EFP partners.

Among the requirements given to the IED students were that the logo and campaign be easily adapted to languages other than English, that they add value to the agreement between the EFP and its partners, and that they talk to the EFP partners to get their feedback and analyse their needs.

At the February 12 meeting, there were many questions from the students, who had little previous knowledge about periodontology and were surprised to hear of the links between periodontitis and systemic diseases.

“A major goal of our federation is to increase awareness of the importance of healthy gums for oral health and overall well-being, and we try to reach out with this message –  which is both a social and health-economic one – as far as possible, using a variety of channels,” said Gernot Wimmer.

“In our eyes, the new awareness campaign, together with our partners’ support, will contribute considerably to this effort, reaching broad levels of the population via the partners’ products with our new logo. This initiative can be seen as another showcase for the fruitful collaboration between the EFP and its partners.”

“From the IED, we see the collaboration with the EFP as an opportunity to be able to work in a real framework project, expanding our horizons and studying in depth topics as important as human health,” said Victoria De Pereda, director of the master’s course. “The Masters of Design and Innovation will work in multidisciplinary teams with co-creation methodologies, engaging the user, exploring our target, and providing a new vision, in order to connect with the audience.”