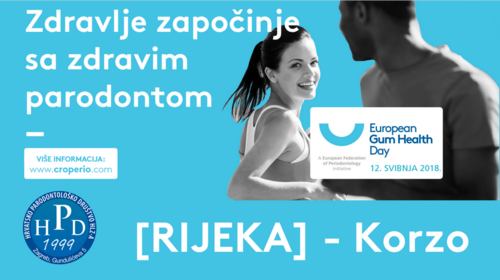 Several EFP-affiliated societies of periodontology took advantage of European Gum Health Day 2018 to provide the public with information about the links between oral health and pregnancy.

National societies in Croatia, Finland, France, Lithuania, Poland, Russia, and the UK used the May 12 awareness day to distribute materials produced by the Oral Health & Pregnancy, the project launched last year by the EFP in partnership with Oral-B.

The Croatian Society of Periodontology organised public events in the cities of Rijeka, Split, and Zagreb, where periodontists and dental students handed out information about gum health in busy pedestrian areas.

Material distributed included translated leaflets and graphics from the Oral Health & Pregnancy project. The society also distributed these materials, together with the EFP dossier on periodontal disease, in clinical periodontology units and dental schools in the same three cities.

The Finnish Society of Periodontology has made the subject of oral health and pregnancy its “theme of the year” and has been using the materials prepared by the Oral Health & Pregnancy project.

An article by Mervi Gürsoy – one of the authors of the scientific reports that formed the basis of the Oral Health & Pregnancy project – about periodontitis and adverse pregnancy outcomes was published in the journal of the Finnish Dental Society.

Activities organised by the French Society of Periodontology and Oral Implantology (SFPIO) for European Gum Health Day also focused on the oral health of pregnant women.

Members of the society took part in “prevention days” at seven maternity units across the country. These actions included the provision of information to pregnant women, along with oral-hygiene products, at hospitals in Colombes, Montpelier, Nancy, Nantes, Rennes, Toulouse, and Metz.

The Lithuanian Society of Periodontology dedicated European Gum Health Day 2018 to the topic of gum diseases during pregnancy.

The society handed out leaflets to all major pregnancy-care centres in Lithuania as well as during a conference for pregnant women. The society translated the project’s guidelines for oral-health professionals and recommendations for women and placed them on its website so that they can be used by its members.

During the preparation of these materials, the society worked with the Lithuanian Association of Obstetricians and Gynaecologists, which also distributed material from the Oral Health & Pregnancy project to its members, publishing the recommendations for women and the guidelines for non-dentistry health professionals on its website. Future conferences organised by the obstetricians and gynaecologists’ association will include lectures about oral health during pregnancy.

The LRT national television channel carried an interview with society member Daiva Gelažienė and Diana Ramašauskaitė, president of the Lithuanian Association of Obstetricians and Gynaecologists, which focused on oral-health issues in pregnant women.

Articles about oral health and pregnancy appeared in Delfi, Lithuania’s biggest news website, in a magazine for mothers, and on the official website of the Lithuanian Dental Chamber.

The Polish Society of Periodontology held a press conference at which it presented material about oral health and pregnancy, and this has already led to various media reports.

This event followed the creation of brochures for patients and guidance for dental and other health professionals and a round-table discussion on oral health and pregnancy on April 4, which was attended by leading Polish periodontists and gynaecologists.

Members of the Russian Society of Periodontology distributed information about the importance of gum health during pregnancy was given to pregnant women who were taking part at a yoga class in one of St Petersburg’s maternity hospitals.

The British Society of Periodontology (BSP) also used European Gum Health Day 2018 to raise awareness of the importance of gum health in pregnancy and childhood.

The society has launched a campaign called “A lifetime of smiling” which emphasises the message that it is never too early to develop good oral-health habits.