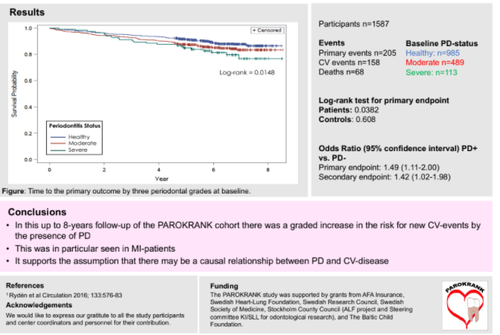 A new study, recently presented at a leading cardiology congress, shows that there is a graded increase in risk of new cardiovascular events in patients with periodontal disease.

The research, performed in Sweden, found that this association was particularly evident among patients who had experienced a heart attack in the past.

The latest research is a prospective follow-up study to the Swedish Parokrank case-control study which reported in 2016 on an independent association between periodontitis and a first myocardial infarction.

This long-term follow-up of Parokrank study investigated whether the presence of periodontitis, both in heart-attack patients and their healthy peers, was related to an increased risk of new cardiovascular events over time.

The analysis included 1,587 participants with an average age of 62 years. Participants underwent a dental examination between 2010 and 2014: 985 were classified as healthy, 489 had moderate periodontitis, and 113 had severe periodontitis.

Participants were followed up for the occurrence of cardiovascular events and death. The primary endpoint was a composite of all-cause death, non-fatal heart attack or stroke, or severe heart failure. Follow-up data were collected until the end of 2018 from Swedish national death and patient registries.

When the heart-attack patients and healthy controls were assessed separately, the graded relationship between periodontitis severity and the primary endpoint was significant only for the patients.

“Our study suggests that dental screening programmes including regular check-ups and education on proper dental hygiene may help to prevent first and subsequent heart events,” said the lead author of the study, Giulia Ferrannini of the Karolinska Institute in Stockholm, Sweden.

She added that the research suggested that the damage of periodontal tissues in people with gum disease may facilitate the transfer of germs into the bloodstream, which could accelerate harmful changes to the blood vessels and/or enhance systemic inflammation.

“It is important to underline that the quality of care in Sweden is high, as confirmed by the overall low number of total events during follow-up,” Dr Ferrannin concluded. “Despite this, gum disease was linked with an elevated likelihood of cardiovascular disease or death.”

This research, presented on August 25 at the European Society of Cardiology’s 2021 congress, adds to the growing body of scientific evidence on the links between periodontitis and cardiovascular disease.

In September 2020, the EFP and the World Heart Federation launched the Perio & Cardio campaign, which includes a set of recommendations for dentists, doctors, and patients.