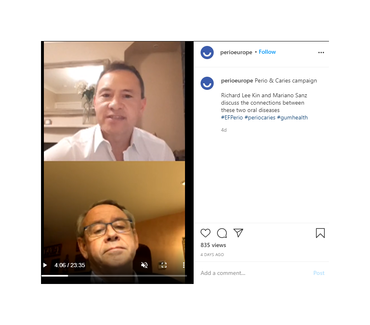 A multifaceted approach, based on prevention and early intervention, is fundamental to tackling the two most common oral diseases of dental caries and periodontal disease.

That was one of the key messages from Mariano Sanz in the latest EFP Perio Talks session on Instagram, where he discussed the EFP’s Perio & Caries campaign.

In conversation with Richard Lee Kin (Dublin Dental Hospital), Prof Sanz (professor of periodontology at the Complutense University of Madrid and co-chair of the EFP’s workshop committee) said that there were “universal” preventive measures that do not cost very much “but which need to be implanted” – such as oral hygiene and regular attendance at dental appointments.

But customised measures were also important, he added, and “the dentist and dental hygienist need to identify people at risk, patients that have high risk of caries, patients with high susceptibility to periodontitis” so that these patients can be provided with individualised preventive measures.

During the Instagram session, Prof Sanz explained the key aspects of the Perio & Caries campaign, sponsored by Colgate, which was launched in January 2018 and which features a wide range of material including brochures, the scientific report Relationship between caries and gum disease, Video interviews with experts, and an infographic.

All the material is based on the outcomes of Perio Workshop 2016, chaired by Prof Sanz, which was jointly organised by the EFP and ORCA (European Organisation for Caries Research), which focused on “the boundaries between dental caries and periodontal disease.”

Introducing the session, Dr Lee Kin said that “it’s incredible to think that our ancestors for thousands of years have suffered from dental and periodontal disease but it is only in recent times that we have explored the common factors to both. These diseases are among the most prevalent and ubiquitous diseases of mankind and continue to be major public-health problems worldwide.”

Mariano Sanz replied that this workshop was held because “these two diseases are probably the two chronic diseases most prevalent in mankind, both are the main topic of our work as dentists, and both are our main goal in terms of providing health to our patients. However, we have always had considered them very independent and separated and have never looked at them with joint eyes.”

The 75 experts who took part in the workshop evaluated the commonalities and the differences between the two diseases, as they worked towards creating a series of evidence-based recommendations, which form the basis of the campaign’s brochures aimed at the oral-healthcare team, non-dental healthcare professionals, researchers, policymakers, and the public.

Prof Sanz emphasised the importance of this “multifaceted” approach and pointed to the challenge to oral health posed by an ageing population, where people who lose their dexterity or who have cognitive problems are particularly vulnerable. In addition, socio-economic factors play an important role, as people from less privileged parts of society are those who will suffer most from caries and periodontitis.

Looking to the future, Prof Sanz considered how advances in technology will help patients in preventing both caries and periodontitis. “We already have toothbrushes that are telling us whether we are clearing all the mouth or just some areas of the mouth,” he said. “And I envisage that the toothbrush will take samples of saliva and tell you whether you are going to have an incipient caries or whether you have specific areas of inflammation in the periodontal tissue that you need to take care of.”

At the end of the session, Richard Lee Kin presented the new animated video produced for the Perio & Caries campaign. This animation, available in 10 languages, is aimed at members of the oral-healthcare team and focuses on the role of dental biofilm in causing both dental caries and periodontal disease.

Some of the comments from this live Instagram EFP Perio Talks session have been edited for clarity and concision.