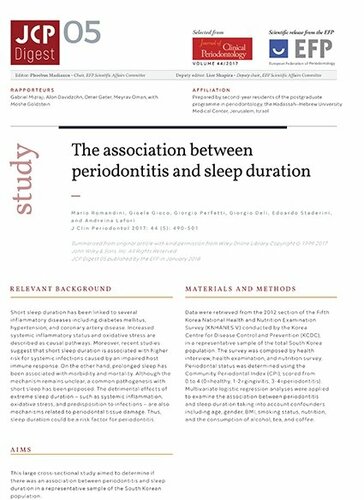 Is there an association between periodontitis and sleep duration? This is the question behind a cross-sectional study carried out by Italian researchers, which has been summarised in the latest edition of the EFP’s JCP Digest.

Short sleep duration has been linked to several inflammatory diseases including diabetes mellitus, hypertension, and coronary artery disease. On the other hand, prolonged sleep has been associated with morbidity and mortality.

As the effects of extreme sleep duration – such as systemic inflammation, oxidative stress, and predisposition to infections – are also mechanisms related to periodontal tissue damage, the hypothesis being tested was that sleep duration could be a risk factor for periodontitis.

This large cross-sectional study, summarised as JCP Digest 05 (44:2017), sought to test the possible association between periodontitis and sleep duration by using a representative sample of the total South Korean population. In assessing links between periodontal status and sleep duration, the researchers took into account various confounders including age, gender, body mass index, smoking status, and the consumption of tea, coffee, and alcohol.

The research found a strong association between sleep duration and that people who sleep for more than nine hours per night have 4.27 times more chance of suffering from periodontal disease compared to those who sleep for less than five hours.

However, the researchers cautioned that it was difficult to generalise observations from a study of a South Korean population to the global population. They said that further longitudinal studies were needed to better understand the directionality of the relationship between periodontitis and sleep duration.

The research was carried out by a team of Italian researchers led by Mario Romandini and based mainly at the School of Dentistry at the Catholic University of the Sacred Heart in Rome. It was summarised for JCP Digest by students at the EFP-accredited postgraduate course in periodontology at the Hadassah-Hebrew University Medical Center, Jerusalem (Israel).

The original research was published in the May 2017 issue of the Journal of Clinical Periodontology, the EFP’s official scientific journal, edited by Maurizio Tonetti, which has an impact factor of 3.477.