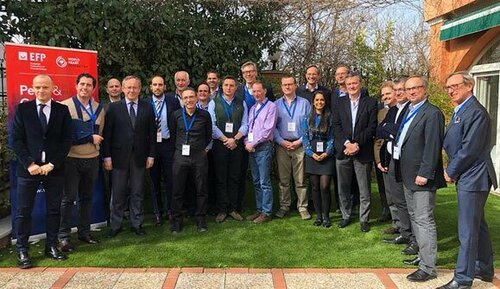 The recently launched Perio & Cardio campaign is the fruit of a workshop held in Madrid in February 2019, where more than 20 experts reviewed the latest scientific evidence on the links between periodontal and cardiovascular diseases and drew up a series of recommendations.

The Perio & Cardio Workshop – which, like this campaign, was organised jointly by the EFP and the World Heart Federation (WHF), in partnership with Dentaid – ended with a rallying call for greater awareness among health professionals and the public of the links between gum disease and heart disease.

The evidence reviewed by the workshop suggested that patients with severe gum disease are at greater risk of heart attack and stroke, particularly if they have had a previous cardiovascular event. Bacteria in the mouth can move into the circulatory system and promote inflammation and hardening of the arteries (atherosclerosis).

In addition, periodontitis and heart disease share common risk factors including smoking, alcohol consumption, diabetes, and age. Cardiovascular diseases (CVD) are the number-one cause of death globally, while severe periodontitis is the sixth most common chronic condition.

“Both periodontitis and cardiovascular disease affect many people worldwide,” said Mariano Sanz, EFP co-chair of the Perio & Cardio Workshop. “Determining the importance of periodontal-disease prevention and therapy as a means to reduce cardiovascular risk can have significant public-health and economic implications.”

The experts developed their recommendations in two working groups.

Working group 1 investigated the epidemiological evidence of the links between periodontitis and cardiovascular diseases, and the biological mechanisms of the increased risk of developing atherosclerosis lesions in patients with periodontitis.

“Cardiologists should be aware of the connection between gum disease and heart disease and encourage their patients to be screened for periodontitis and pursue good oral hygiene because it will improve cardiovascular outcomes,” said Alvaro Marco Del Castillo, WHF co-chair of the working group.

Working group 2 explored the effect of intervention trials on atherosclerosis risk parameters and the potential cardiovascular risks of oral interventions.

“Patients with periodontitis should be advised that they have a higher risk of heart disease and should manage their CVD risk factors,” said Søren Jepsen, the group’s EFP co-chair). “Regarding potential cardiovascular risks of periodontal treatment, available research indicates that periodontal treatment is safe for cardiac patients.”

José Ramón González Juanatey, the group’s WHF co-chair, said that more research on the effect of periodontal treatment on the risk of atherosclerosis was needed, but “current evidence suggests that the progression of CVD may be influenced by good oral hygiene and successful periodontal treatment.”

The workshop also pinpointed areas for future research, including clinical trials using hard cardiovascular outcomes and further studies to understand the mechanisms by which oral bacteria may cause damage to cardiovascular tissues.

The workshop updated and built on the work of the EFP’s pioneering IX European Workshop on Periodontology, held in 2012, which explored the links between periodontitis and systemic conditions including cardiovascular diseases. This workshop formed the basis of the EFP Manifesto on periodontal and general health.