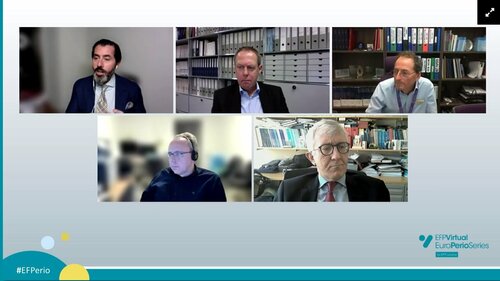 The fourth session in the EFP Virtual EuroPerio Series on online educational events linked to the scientific programme of next year’s EuroPerio10 congress focused on the use of adjunctives during the second step of periodontal therapy.

Focussing on step 2 of the EFP’s S3-level clinical practice guideline on the treatment of periodontitis in stages I-III, the session explored when adjunctives should be used alongside subgingival instrumentation.

Chaired by Filippo Graziani, former EFP president and professor of periodontology at the University of Pisa, the session involved four speakers who discussed the evidence and rationale for using different groups of adjunctives.

Giovanni Salvi (University of Bern, Switzerland) explained improved technologies in subgingival instrumentation, including lasers and photodynamic therapy. He reported that there was great heterogeneity among studies and that patient-reported benefits had yet to be demonstrated, concluding that “at the moment, mechanical subgingival instrumentation alone that the adjunct of the laser is not at the moment strongly evidence-based as we would like it to be.”

Iain Chapple (University of Birmingham, UK) highlighted the latest developments in adjunctive antioxidant nutrients and whether these could improve the results of subgingival instrumentation. After citing studies of the effect on periodontal conditions of the consumption of Vitamin C-rich fruits such as kiwifruits and guava, he said that it was “early days” but there was “emerging evidence for anti-inflammatory roles played by micronutrients, but we don’t know enough about what the strength of that impact will be until we understand more about the genetics of the individual.”

Wim Teughels (KU Leuven, Belgium) took up the controversial topic about the use of adjunctive antimicrobials. He showed that systemic antimicrobials (specifically metronidazole and amoxicillin) result in “statistically significant and clinically relevant greater periodontal pocket depth reduction, higher percentage of pocket closure, reduction in frequency of residual deep pockets, greater clinical attachment level gain, and bleeding-on-probing reduction.” However, he noted that while the combination of metronidazole and amoxicillin was the most effective option, it was also the one associated with the largest frequency of side effects.

Alpdogan Kantarci (Forsyth Institute, Massachusetts, USA), gave a presentation on adjunctive host-modulating agents. He explained how host-modulation therapy is an emerging treatment for managing all forms of periodontitis and how it is aimed at “controlling the inflammation to control the infection rather than the old concept that was focused solely on controlling the infection to control the inflammation.”

The session was rounded off with a debate involving all five participants on selecting the best adjunctives.

All the participants in this latest EuroPerio Series session will be speaking at EuroPerio10 in Copenhagen in June 2022:

The fifth session in the EuroPerio Series is scheduled to take place on Monday, January 10 from 18.00 to 20.00. Chaired by Tord Berglundh (Sweden), it will explore the “Scandinavian connection” in peri-implant diseases and what is new in the surgical management of these diseases. The session will feature contributions from EFP president-elect Andreas Stavropoulos (Denmark), Lisa Heitz-Mayfield (Australia), Jan Derks (Sweden), and Frank Schwarz (Germany).

Registration for the session is €35 but access is free for people who have previously registered for EuroPerio10.