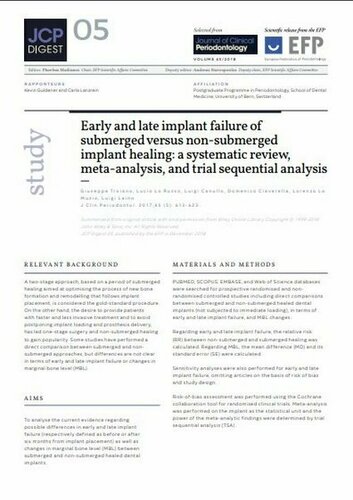 The two-stage approach to implant placement, based on a period of submerged healing, is considered the “gold-standard” procedure in implant dentistry. However, the alternative approach of one-stage surgery and non-submerged healing is gaining popularity.

Researchers based mainly at the University of Foggia in Italy analysed the evidence regarding possible differences between these two techniques in terms of early and late implant failure.

The study – a systematic review, now summarised as JCP Digest 05 (2018: 45) – showed a slightly higher rate of early implant failure when a non-submerged healing approach was used. However, no differences were found for failures occurring later than six months from implant placement.

Researchers added that the results of the review seemed to favour non-submerged healing in relation to effects on changes to crestal bone level, although they cautioned that this was with “a very small effect size.”

The study was published in the May 2018 edition of the EFP’s Journal of Clinical Periodontology. It was summarised for JCP Digest by students at the postgraduate programme in periodontology at the University of Bern in Switzerland.