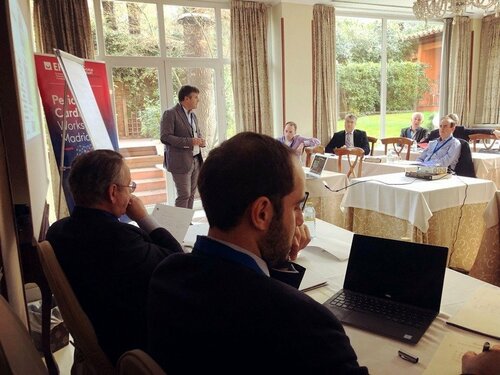 The Perio & Cardio Workshop has started, bringing together more than 20 experts to explore the latest evidence about links between periodontal disease and cardiovascular diseases and draw up a series of recommendations.

The workshop organised jointly by the EFP and the World Heart Federation (WHF), in partnership with Dentaid, is being held in Madrid on February 18 and 19.

The experts are reviewing scientific papers and producing consensus reports, which will later be published in the EFP’s Journal Clinical Periodontology.

The workshop, which takes place at the Hotel Quinta de los Cedros, will update and build on the work of the EFP’s IX European Workshop on Periodontology, held in 2012, which explored the links between periodontitis and systemic conditions including cardiovascular diseases.

In the longer term, the EFP’s communications team will develop an outreach project, also sponsored by Dentaid, that will disseminate the key information from this workshop among various groups: oral-healthcare professionals, physicians, pharmacists, researchers, media, patients, and the public.

“The EFP is making an effort to develop clear, evidence-based recommendations on those diseases where periodontitis has clearly established epidemiological associations,” said Prof Sanz. “Cardiovascular diseases are the main cause of death in the developed world and their prevention is critical in current societies.”