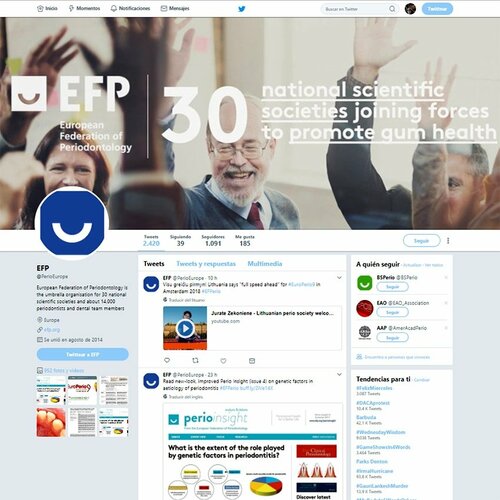 The EFP’s page on the Twitter social-media platform now has well over a thousand followers and during the last year its tweets have been seen by more than 2.2 million people.

By August 30, the page had received a total of just over 2.2 million “tweet impressions” (the number of times a tweet has been seen online). So far this year, EFP tweets have received 8,070 “likes”, 41% more than during the same period of 2016.

The second most popular tweet was one in Portuguese about an issue of JCP Digest: “Tratamento periodontal não cirúrgico associado à administração sistémica de antibióticos JCP Digest 9 #EFPerio”, which received 41,192 impressions and 10 engagements.

A tweet about the new EFP Alumni project –  “#EFPerio launches project for alumni of graduate programmes and invites online registration” – received 40,795 impressions and four engagements, while the tweet “2017 – a busy year for the #EFPerio with much more to come” was not far behind, with 40,859 impressions and 11 engagements.

The EFP is planning to revamp its social-media activities in the autumn and news about this will follow soon.