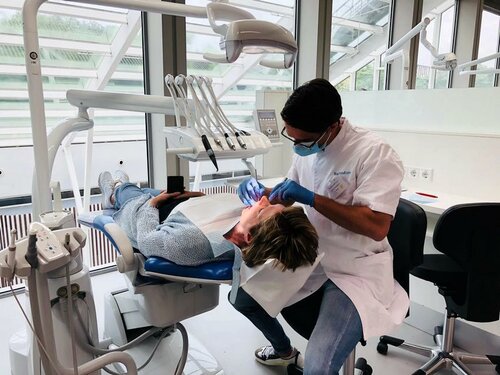 Because of public holidays in the Netherlands, the Dutch Society of Periodontology (NVvP) chose to hold its activities for European Gum Health Day on Wednesday, May 16.

On this day, 60 periodontal, dental, and oral-hygiene practices across the country offered a special consultation hour (or hours) during which patients could attend and receive free periodontal screenings.

Beforehand, the NVvP had provided participating practices with posters and made special cards about the DPSI (the Dutch Periodontal Screening Index, a widely used method for assessing periodontal status) to be provided to patients. In addition, Oral-B provided promotional material including toothbrushes, toothpaste, folders, and a discount coupon

In The Hague, the society provided free screenings in a mobile dental practice (provided by the Dutch Army), which it said had been a huge success with 30 patients attending during the day. This activity was filmed both by the society and by the Dutch Society for Dentistry (KNMT).

There was an extensive interview with Professor Frank Abbas (Groningen) on a news programme on a national television channel, and articles about this interview were published in several newspapers.