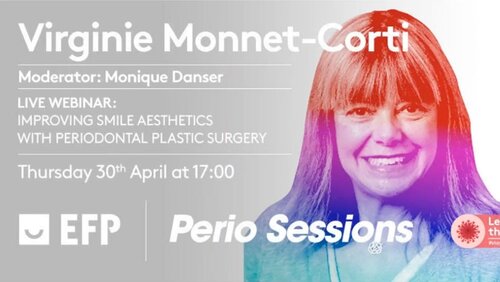 Virginie Monnet-Corti’s EFP Perio Sessions webinar on April 30 tackled the question of how to improve smile aesthetics using periodontal plastic surgery and was watched by more than 500 people in 68 countries.

In this third webinar of the Perio Sessions series, Prof Monnet-Corti (professor and chair of the department of periodontology at the University of Aix-Marseille in France) discussed the evaluation of gum aesthetics and compared professional assessment with that of patients.

She described the Smile Esthetic Index (SEI), to date the only validated method to dental professionals to measure the aesthetics of the smile. In the format of a questionnaire with 10 variables, this index covers facial traits, dental characteristics, and periodontal status (see picture).

She contrasted this with the patients’ perception of gum-smile aesthetics, where the pink and white components (gums and teeth) are evaluated by using the Gum Appearance Visual Analog Score (GAVAS), where the patient gives a rating on a scale of 0 to 10.

She showed how professional (objective) and patient (subjective) assessments of aesthetics can be at variance.

In one case, which involved crown-lengthening surgery, she showed how before surgery both the SEI index and the GAVAS score had been 4/10 but, after surgery was completed, the patient rated the appearance as 10, although from the dental professional’s point of view the SEI rating was only 8 and there was more work to be done, which the patient refused.

This brought the speaker to the key question of “What can we use to evaluate in a reliable way the true perceived aesthetic of the smile by the patient?”

She suggested that short videos of patients’ smiles before and after therapy – during which the patient’s speech, smile, and usual gingival display is apparent – may be the answer, as they can represent a situation closer to the reality of the smile than that shown by posed photographs.

Describing a study in which she and two other observers evaluated videos of 65 patients’ smiles using the SEI, she reported that the overall variation between the assessors was 0.96, which is considered an “almost perfect” agreement.

“Yes, we can improve smile aesthetics by periodontal plastic surgery”, she concluded, and the use of video clips was beneficial “to help professionals evaluate smile aesthetics with the previous validated SEI.”

A future study using videos will have an increased number of professional assessors and will compare their results with evaluations by patients. Prof Monnet-Corti and her team are now developing a new questionnaire more centred on patients’ criteria to evaluate the smile-gingiva aesthetics.

The webinar was introduced by EFP treasurer Monique Danser, who said: “As the EFP, we have launched Perio Sessions in this difficult time for all of us. It is a concept where we have live interactive webinars where we invite top experts in the field of periodontology to discuss several interesting topics. As the EFP, it is our vision to promote science and research, education and training, and thus contribute to the overall health and well-being of all.”

A recording of the webinar is now avaialble on the EFP's YouTube channel in the Perio Sessions playlist.

The fourth live webinar in the EFP Perio Sessions series will be given by Orly Nir-Shapira (private practice, Israel) on Thursday 7 May, at 17.00 (CET). She will discuss how to maximise the outcome of non-surgical periodontal treatment using the personalised approach.