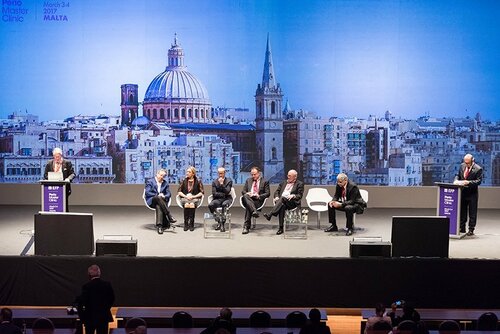 The past 12 months have been extremely busy and fulfilling for the EFP, with highlights including several important scientific workshops, the launch of an educational project on oral health during pregnancy, and the hugely successful European Gum Health Day.

January: The year began with a healthy 40% increase in signatures of the EFP Manifesto “Perio and General Health”, a call to action on the prevention, early detection, and treatment of periodontal disease.

February: The main event in February was the joint workshop held by the EFP and the International Diabetes Federation in Madrid. The Perio-Diabetes Workshop produced a scientific consensus on the links between periodontitis and diabetes, along with guidelines for dentists, physicians, and patients.

March: The highlight of March – and one of the main highlights of the EFP’s year – was the EFP Perio Master Clinic, held in Malta. More than 500 participants from 56 countries were brought up to date with the latest scientific findings about peri-implantitis and new approaches to its treatment.

April: The EFP held its general assembly in Santiago de Compostela  (Spain) at which Juan Blanco handed over the presidency to Gernot Wimmer and the assembly approved a new four-year strategic plan for the federation, which also welcomed the Azerbaijan Society of Periodontology as its 30th member.

June: The EFP issued its call for entries for its prestigious EFP Research Prize in Periodontology (formerly the Jaccard Prize) which will be awarded at EuroPerio9 in June 2018.

July: The EFP Alumni programme was launched – a network based around the EFP’s accredited programmes in periodontology that are taught at 16 universities in 11 countries. The main aim is to bring together graduates and teachers of this programmes, as well as present and former members of the EFP executive committee. There will be a special session for EFP Alumni at EuroPerio9.

August: The full scientific programme for EuroPerio9 was published and Michèle Reners, chair of the congress organising committee, outlined her vision of the event which she said would be more interactive than previous EuroPerios, with a greater participation from women and young periodontal professionals, and with many innovations in the schedule.

September: The EFP’s 7th Postgraduate Symposium took place on September 7 to 9 in Ballyconnell (Ireland), bringing together more than hundred students and university lecturers for an intensive programme of clinical and research presentations. During September, the EFP launched – in partnership with Oral-B – the Oral Health and Pregnancy project, which offers information and advice about oral health during pregnancy, based on the latest scientific evidence, to health professionals and patients.

October: Iain Chapple, EFP secretary general, outlined his vision of the federation as “the global opinion leader on all issues relating to periodontal health and dental implants.” In an interview in the new-look EFP News bulletin, Prof Chapple discussed the implementation of the new strategic plan and the new organisational challenges the EFP faces. During October, the EFP also unveiled plans to stage a Perio Master Clinic in Hong Kong in 2019.

November: The World Workshop on the Classification of Periodontal and Peri-implant Diseases, organised jointly by the EFP and the American Academy of Periodontology, took place in Chicago. More than 100 leading scientists met to develop a new classification system for periodontal and peri-implant diseases and conditions. The full consensus reports, which will shape periodontology for many years to come, will be published in 2018.

December: The EuroPerio9 organising committee reported a record number of abstract submissions from periodontists and implant dentists who wish to give presentations at the EuroPerio9 congress in Amsterdam in June 2018. A total of 1,750 abstracts were received, compared to the previous record of 1,614 submitted for EuroPerio8 (London, 2015).

“Looking back on 2017, we can see a lot of successful activities involving the EFP,” said EFP president Gernot Wimmer. “This has been a great year in which we have all achieved a great deal.”