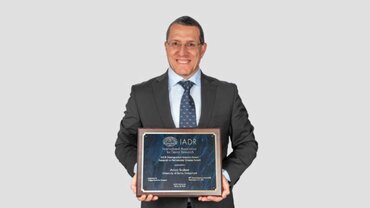 The International Association for Dental Research (IADR) has awarded its 2020 Distinguished Scientist Award for Research in Periodontal Disease to Anton Sculean, past president of the EFP and scientific chair of the recent Perio Master Clinic 2020.

The award, one of the top distinctions in dentistry, was made in recognition of Prof Sculean’s “significant contribution to the field of oral-health research.” It was awarded on March 18, on the one hundredth anniversary of the founding of the IADR:

This Distinguished Scientist Award, which consists of a monetary prize and a plaque, is designed to recognise, encourage, and stimulate outstanding achievements in research and its translation through clinical research in periodontal disease. One of the highest honours bestowed by the IADR, it is supported by Colgate-Palmolive Company.

He is a world-renowned researcher and clinician in the field of periodontology, with more than 370 peer-reviewed scientific articles published in leading journals, focusing on periodontal research and related disciplines. His work centres on preclinical and clinical research related to periodontal wound healing, regenerative and plastic-aesthetic periodontal therapy, and the use of antibiotics, antiseptics, and novel approaches (such as lasers and photodynamic therapy) in the treatment of periodontal and peri-implant infections.

“I was deeply honoured and humbled but at the same time extremely delighted to receive the news from the IADR central office,” said Anton Sculean. “However, in my eyes this award represents the recognition of the work of our team in Bern and also our long-lasting collaboration with outstanding colleagues and friends from various institutions in Hungary, Denmark, Sweden, Germany, Romania, UK, USA, Canada, China, Italy, and Japan, because research today is impossible to be accomplished without a global and inclusive spirit encompassing a great team of highly qualified and motivated people.

“I have been fortunate and privileged to have been mentored by true giants in our field like Thorkild Karring and Jörgen Theilade in Denmark and Michel Brecx in Belgium and to have worked for decades with extraordinary colleagues and friends like Andreas Stavropoulos, Nikos Donos, Peter Windisch, Istvan Gera, Giovanni Salvi, Vincenzo Iorio-Siciliano, Frank Schwarz, Nicole Arweiler, Sigrun Eick, Dieter Bosshardt, Richard Miron, and Yoshinori Shirakata.”

Anton Sculean is the third person who has served on the EFP’s executive committee to receive the IADR Distinguished Scientist Award for Research in Periodontal Disease, following Lior Shapira (president-elect) in 2009, and Iain Chapple (secretary general 2016-19) in 2018.