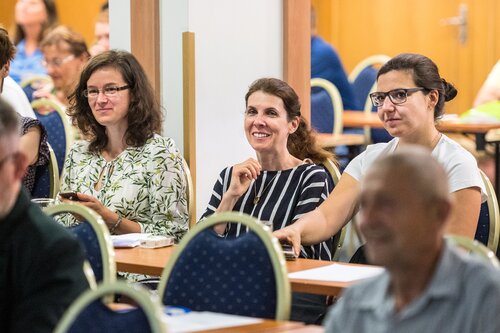 The Czech Society of Periodontology held a two-day scientific meeting covering topics ranging from immediate implant placement and the use of lasers in periodontal and peri-implant therapy to oral manifestations of sexually transmitted diseases.

The “Periodontology Days”, which took place on June 18 and 19 in Darovanský Dvůr near Pilsen, were attended by nearly 100 participants.

On the first day, Radovan Slezák warned dentists and periodontists to be aware of the oral manifestations of sexually transmitted diseases, Martin Tomeček discussed the issues involved in immediate implant placement in periodontally compromised patients, and Vladimír Ščigel explained the damaging effects of certain medications on the oral mucosa.

The following day Pavel Poleník explained the benefits of laser therapy, Lukáš Hauer discussed treatment of patients with medication-induced haemocoagulation disorders, and Petr Kessler explained how to prepare surgery for patients who are undergoing anti-coagulation therapy and then presented a clinical case of amyloidosis in the oral cavity.

There was also a special session in remembrance of Jiří Sedelmayer, a well-known dentist and teacher, in which Petr Bednář discussed amalgam versus composite fillings, suggesting that there are still some indications – such as below the gingival margin – where the latter type of filling remains valid.

“The Periodontology Days at Darovanský Dvůr showed the high scientific and professional level of lecturers,” said Michal Kania, a member of the board of the Czech Society of Periodontology. The society’s next “Periodontology Days” meeting is scheduled for October 22 and 23 in Ostrava.