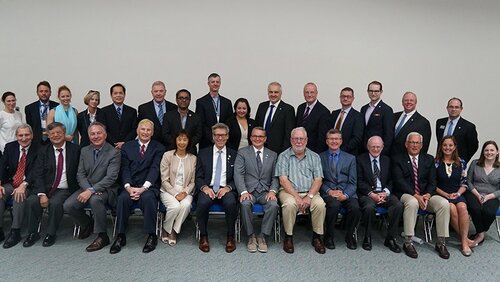 An EFP delegation received a very warm welcome at a meeting with the leadership of the American Academy of Periodontology (AAP) to discuss the preparations for next year’s World Workshop on Periodontal and Peri-Implant Disease Classification.

The meeting considered the latest plans for this important workshop, which will be held in Chicago in November 2017, and also provided information about the event to potential sponsors, encouraging them to sign up. Three-quarters of the budget has already been covered by educational grants, including one from the AAP Foundation.

The meeting heard that the work of the committee and the logistics of the event are well on schedule. Invited review authors have been busy over the last six months and have now uploaded their papers for peer review. Leading experts from all over the world are being invited to attend as participants in the four working groups.

The EFP was represented by Søren Jepsen, immediate past president of the federation, and by Sharon Legendre, head of operations.

The meeting took place on September 12 in the San Diego Convention Center in San Diego, California, during the AAP’s 102nd annual congress.

“The joint AAP/EFP World Workshop will be the world’s most important meeting on a new classification of periodontal and peri-implant diseases and will bring together 100 of the world’s leading scientific experts in the field. Its outcomes will certainly have a major global impact for years to come”, said Prof Jepsen.

The workshop’s scientific committee is comprised of the co-chairs Jack Caton and Panos Papapanou (both AAP), Mariano Sanz and Søren Jepsen (both EFP), together with committee members Gary Armitage and Brian Mealey (both AAP), and Tord Berglundh and Iain Chapple (both EFP).

The 2017 World Workshop will be the fourteenth EFP Perio Workshop and the second scientific workshop organised jointly by the EFP and the AAP. It follows the 9th European Workshop in Periodontology, held in La Granja de San Ildefonso in Spain in 2012, which reviewed the scientific evidence linking periodontitis to general diseases such as diabetes and cardiovascular disease.

The EFP’s Jepsen and Legendre also took the opportunity of the meeting with the AAP representatives to promote EuroPerio9, which will take place in Amsterdam in June 2018.