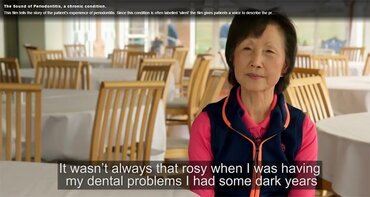 The EFP is encouraging users of its website to download and share the documentary film The Sound of Periodontitis, which offers a vision of periodontal disease and treatment from the perspective of the patient.

The aim is to ensure the widest possible distribution for the EFP-backed film, which shows how periodontitis can have a big impact on peoples’ lives as well as the beneficial effects of treatment.

The EFP believes that periodontists, dentists, and others involved in oral health could use the film to provide information to patients and to train dental professionals.

The Sound of Periodontitis is available in its original English version and with subtitles in Croatian, Estonian, French, Polish, Russian, and Spanish.

The federation is making The Sound of Periodontitis available free of charge, the only requirements it imposes are that the film is not edited or modified in any way and that it is attributed to the European Federation of Periodontology.

Those interested in sharing the documentary can do so by completing a form on the EFP website, providing information about themselves, how they plan to use the film, and which version they require. They will then receive the appropriate link via email.

The EFP also encourages people who download and share the film to provide feedback explaining how they have used the film and the reaction of audiences. Viewers can also complete a questionnaire about The Sound of Periodontitis on the EFP website page devoted to the film.

The federation also continues to encourage the wider reach of the film by facilitating the provision of subtitled versions through a section of the Members’ area of the website where translated texts can be entered so that subtitled versions can be created. Any national society wishing to do this should contact Monica Guinea, the EFP’s European Co-ordinator (monica@efp.org).

The Sound of Periodontitis, which received its premiere at EuroPerio8 in London in June 2015, is the fruit of a collaboration between the British Society of Periodontology and the British Society for Dental Hygiene and Therapy, led by the UCL Eastman Dental Institute with support from the UCL Public Engagement Unit. In the last 18 months, the film has been viewed and downloaded more than 17,000 times.

Ian Needleman, professor of restorative dentistry and evidence-based health care at the UCL Eastman Dental Institute and president of the British Society of Periodontology, said: “The film continues to grow in its reach across Europe well beyond our expectations. It is helping to inform new audiences about the dreadful impact of untreated periodontal diseases on peoples’ lives but also the very positive messages about how much treatment can help.”

Tiernan O’Brien, chair of the EFP’s communications committee, added: “It is remarkable how well this innovative film has been received around Europe and, indeed, the world.  At the EFP, we are getting constant requests from dental organisations to use the film and it is clear that patients relate easily to the stories presented in the film.

“It appears that patients may be better educators of other patients than we are as professionals.  From our experience with this film, public engagement is something that we need to embrace and build on in the future.”