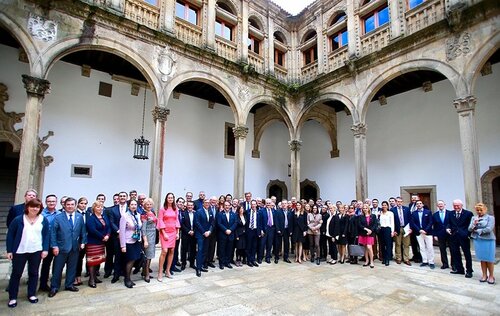 The EFP’s annual general assembly, held in Santiago de Compostela (Spain) on April 1, approved a new four-year strategic plan along with a package of projects that will shape the future of the federation – and its impact on global healthcare – for years to come.

The assembly approved the organising committees for EuroPerio10 (Copenhagen, 2021) and for the third Perio Master Clinic, which will take place in Dublin in 2020.

The assembly also marked the end of Juan Blanco’s one-year term as EFP president, with Gernot Wimmer (Austria) taking the role for the next 12 months.

The new strategic plan, approved by the general assembly, will take effect immediately and run for the next four years, until the 2021 general assembly. It has five focus areas – science and research; policy and influence; improving health and well-being; education and training; communication and awareness. A novel factor of the new plan, which can be viewed on the EFP website, is the appointment of five EFP officers to oversee its implementation in each of these specific areas.

The general assembly also approved the creation of two new bodies: the European Projects Committee and the European Observatory of Periodontology and Implant Dentistry (EOP).

The European Projects Committee has been set up to harmonise major EFP projects and will see senior EFP officers and representatives of the five larger member societies (those of Spain, Germany, the United Kingdom, Italy, and the Netherlands) work together with three representatives of the smaller societies - initially Ireland, Poland, and Portugal.

The smaller societies will participate on a rotating basis over a six- to seven-year cycle, ensuring a balance in decision-making. However, said EFP secretary general Iain Chapple, “if this is to work as we expect, then this committee will need to operate through consensus and not have to fall back on voting.”

Prof Chapple described the European Projects Committee as “a universally popular solution to what had become a minor crisis within the EFP and we can now move forward with a full mandate to deliver our ambitious strategic plan.”

He said that Juan Blanco’s gathering of the evidence behind “the disquiet of the last two years” had provided “very clear answers” and shown full support for the EFP’s constitution and governance structures, especially the one-member one-vote system.

But, he continued, it was also clear that the EFP needed “a vehicle through which we could design, co-ordinate, and – most importantly – communicate bi-directionally our major projects to our member societies. The European Projects Committee will do that and avoid conflicts of interest with national-society initiatives and our loyal partners who fund these initiatives.”

The European Observatory of Periodontology and Implant Dentistry will act as the EFP’s primary point of reference for matters concerning periodontal and peri-implant diseases. It will be a repository for evidence-based information and the authoritative body for comment and statements on issues relating to periodontal diseases and implant dentistry.

It is chaired by Lior Shapira (Israel), deputy chair of the scientific affairs committee, and will work in close collaboration with the president-elect, the chairman of the communications committee, and the head of operations.

The executive committee presented a single proposal for the organising committee for EuroPerio10, which will take place at the Bella Center centre in Copenhagen (Denmark) in 2021. The committee is led by Phoebus Madianos (Greece) as chair, David Herrera (Spain) as scientific chair, and Nicola West (UK) as treasurer.

Another important decision taken was to select a country and an organising committee for the EFP’s third Perio Master Clinic. The general assembly decided that this event should be held in Dublin in March 2020, with Declan Corcoran (Ireland) as chair and Anton Sculean (Switzerland) as scientific chair. The proposed topic is “Challenging paradigms in hard- and soft-tissue reconstruction.”

This proposal won more votes than the alternative one for the Master Clinic to be held in Krakow, Poland, chaired by Dr Nela Brodzikowska (Poland) and Filippo Graziani (Italy) as scientific chair, with the proposed topic of “Minimal invasiveness in periodontal and implant surgery.”

The postgraduate education committee informed the assembly that this year’s EFP Postgraduate Symposium will be held on September 7-9 at the Slieve Russell Hotel in Ballyconnell, Ireland. It will be organised by Ioannis Polyzois, director of the postgraduate programme in periodontology at the Dublin Dental University Hospital, Trinity College, Dublin, and his faculty.

The executive committee asked Nairn Wilson to re-activate his valuable work on this issue and to focus on those three countries required for the EFP to achieve the two-fifths threshold for automatic recognition of periodontology as a speciality in Europe.

The general assembly, held at the Hotel Parador Santiago de Compostela, also received an update on plans for EuroPerio9 in Amsterdam in June 2018.  Innovations in the scientific programme include a special session dedicated to alumni of the EFP’s accredited postgraduate programmes in periodontology, various new session formats, and live surgery. Dutch astronaut André Kuipers has been invited to give a keynote lecture on "technology and innovation."

On behalf of the executive committee, Iain Chapple presented plans for new programmes with EFP partners to communicate key messages for the benefit of patients, the public, and professional bodies in co-ordination with the national societies of periodontology. Various projects are already under discussion.

As is customary, the general assembly included the awarding of EFP prizes. Mike Curtis received the Distinguished Scientist Award, Uros Skaleric was given the Distinguished Service Award), and four prizes were given for graduate research.