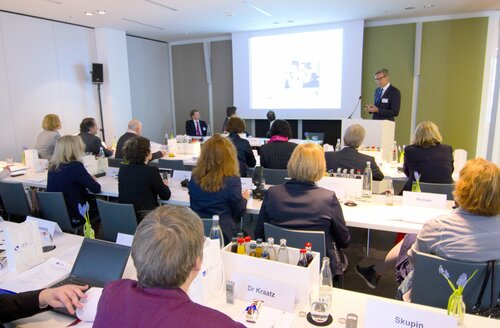 The EFP has launched a call for Europe-wide action to improve oral health, general health, and public health. At a press conference in Frankfurt on April 12, EFP president Søren Jepsen and other officers highlighted the research that demonstrates links between gum disease and systemic illnesses such as type-2 diabetes, cardiovascular diseases and other chronic conditions.

They pointed out that periodontal practitioners and dentists can play a key role not only in helping people to maintain and improve their oral health, but also in preventing, detecting and controlling these other serious illnesses, which could have a vast impact on public health on a global scale.

“The periodontal practitioner is going to become a key agent of change and health promotion as the dental practice is the ‘health facility’ most regularly visited by healthy people,” said Prof Jepsen. “This provides an opportunity to prevent disease, or at least to detect it in an early stage.”

“For some patients, gum disease may be a trigger and/or an indicator of a chronic non-communicable disease, so prevention and treatment of periodontitis is going to have a major role to play in public health promotion,” explained Iain Chapple, chairman of the EFP’s scientific committee. “Gum disease is a risk factor for diabetes and is associated with greater complications of diabetes in a dose-dependent manner.”

The EFP invited David Cavan, director of policy and programmes at the International Diabetes Federation, to be a special guest speaker at the Frankfurt press conference. “It is clear that gum inflammation is associated with adverse outcomes in people with type-2 diabetes and may hasten its development,” noted Dr Cavan.

The Frankfurt event, which highlighted the 25th anniversary of the founding of the EFP, also unveiled plans for the celebration of European Day of Periodontology on May 12.

“Healthy gums for a better life” is the slogan chosen for this year’s event, the third time that the EFP has staged activities on May 12 to raise public awareness of the importance of gum health. Many of the EFP’s national societies are planning special activities for this day.

Juan Blanco, who becomes the federation’s president after its general assembly in Berlin on April 23, added this his priority will be to continue “putting gum health and gum disease high on the international health agenda for the first time in history. We hope to contribute to the common interest of patients, authorities, health agents and citizens in general by raising awareness of periodontology, and by encouraging research and best practices.”

As an example of how pervasive gum disease is in Europe, Peter Eickholz, president of the German society of periodontology, revealed some data about prevalence in Germany, where 20-30 million citizens suffer from periodontitis (including eight million with severe periodontitis).