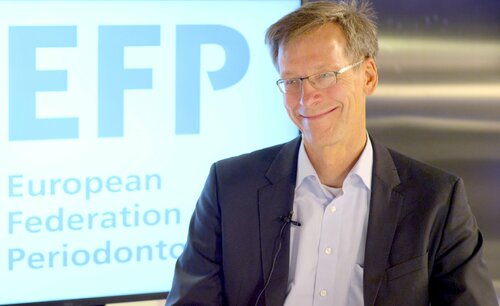 Søren Jepsen, president of the EFP, believes that a very important task facing the federation is to expand and improve its dissemination of scientific knowledge.

“My top priority is to strive for the advancement of our strategic plan according to our vision: ‘Periodontal Health for a Better Life’,” he says. “This is such a powerful theme, message, and mission – and it is what the EFP is all about.”

In a wide-ranging interview, looking back on the first eight months of his presidency, Prof Jepsen says that the EFP has “always been very good at creating strong scientific content” and cites the evidence-based research findings and consensus reports produced by the 11 editions of the European Workshop in Periodontology.

Their impact has been high, he says, because the content has been published in the Journal of Clinical Periodontology, the EFP’s prestigious scientific journal. In addition, through the triennial EuroPerio congresses “we have been able to communicate our findings to periodontists, dentists and dental hygienists from all over the world.”

But, says the EFP president, the federation “has not been as successful with the dissemination of our knowledge to our patients, to the public, and also to health policy makers.”

Jepsen says that the EFP needs to “let people know” that periodontitis is widespread, that it can be prevented, and that it can be treated, especially when detected early. “But we also have to let them know that, in its severe form, it can become a serious threat not only to oral health but also to patients’ general health and well-being.”

For this reason, the EFP is busy preparing a media campaign to disseminate the conclusions of two recent European Workshops – on periodontitis and systemic diseases, and on the prevention of periodontal and peri-implant diseases.

“This public-awareness campaign is aimed at changing attitudes and behaviour and will be conducted together with our national societies,” says Prof Jepsen.

A lot of groundwork for this media campaign was done at the Media and Health Promotion Workshop, held in Madrid in November. The EFP president says that “it was very good to see the involvement at the workshop of the newly appointed EFP junior officers”, and praises the initiative of past president Michèle Reners to involve the rising generation of periodontists in the work of the federation.

Jepsen says that he feels privileged to have witnessed and to have been actively involved in “so many exciting projects and developments” since he took over as EFP president at the general assembly in Athens in April last year. He says that the EuroPerio 8 congress, attended by almost 10,000 people, was a “real highlight” and that it was an “overwhelming” experience to see the “periodontal world” gathered together in London.

He also particularly enjoyed his visit to the 6th EFP Postgraduate Symposium, which took place in San Lorenzo de El Escorial, Spain, in September. “Here I met many talented young people with enthusiasm and passion for our profession,” says the EFP president. “It was good to see the next generation – our future leaders – and their passionate professors from a large and increasing number of excellent residency programmes.”

Other highlights of the year included the successful presentation by an EFP delegation to the European Parliament in Brussels in June and the subsequent short video Gum Health Matters, in which a group of MEPs voiced their support of periodontology and acknowledged that periodontitis was a public-health issue.

Another important initiative has been preparing for the World Workshop on the Classification of Periodontal and Peri-implant Diseases, which the EFP is jointly organising with the American Academy of Periodontology (AAP) and which will be held in Chicago in 2017.

“This exciting initiative was started already the previous year under the presidency of Phoebus Madianos, with our visit to the US,” notes Jepsen. “During this summer a joint organising committee was formed and the programme was finalised.”

Impact of the EFP Prevention Workshop

Prof Jepsen also highlighted the release of the far-reaching conclusions and recommendations of the EFP Prevention Workshop, published in the JCP in April and recently made available at a special website dedicated to the topic. The EFP also held its first-ever online seminar in November, where the four co-chairmen of the Prevention Workshop discussed its conclusions and guidelines.

“The EFP Prevention Workshop was a great success and the scientific articles in the JCP are highly read and cited. The new website is indeed extremely helpful to make the outcomes of the workshop accessible to everybody. We have made an extra effort to communicate the recommendations reached by expert consensus - not only to dental health professionals but also to patients and the public - and to encourage their adoption by our national societies.

“Many of our national societies have expressed an interest and some have already begun to translate the recommendations into their respective languages and make them available in their countries. We are very happy about his, as this has been exactly our idea and intention. We will also make the outstanding films The Sound of Periodontitis and Oral and General Health – the Link between Periodontitis, Atherosclerosis and Diabetes available to all."

In terms of the EFP as an institution, Jepsen mentions that work continues in pressing the case of recognition of periodontology as a speciality by the European Union. He also emphasises “We also began an open discussion on how to balance the interests and needs of the smaller and the bigger societies within the EFP and on how to improve the exchange of expertise between the national societies, so that they can learn and benefit from each other.”

Building strategic relationships with European institutions and organisations is increasingly important to the EFP. Prof Jepsen mentions recent involvement with the European Commission, the Chrodis joint action on chronic disease, and the Platform for Better Oral Health in Europe. He adds: “In the near future, we plan to visit the World Health Organization (WHO) and we want to establish links with the International Diabetes Federation (IDF Europe).

Looking further ahead, the EFP president points to the 2017 Master Clinic in Istanbul, devoted to the topic of peri-implantitis, and says that “the preparations for the next EuroPerio9 conference in Amsterdam in 2018 have already had an enthusiastic start.”

Summing up the current state of the EFP, Jepsen says: “We are a very healthy organisation, when I look at the enthusiasm, creativity and ideas of all our colleagues who work as volunteers on the EFP board and in the various committees.”

But he warns: “We have to watch out that we do not become a ‘victim of our own success’ by trying to do too much. All of us have full-time jobs, whether as clinical practitioners or as academics. I am convinced that in the near future we will need more professional help in order to manage and monitor all our initiatives and activities in an even more effective way.”