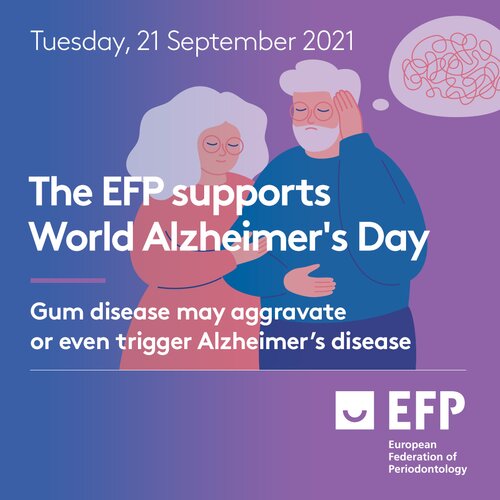 The EFP has expressed its support for the World Alzheimer’s Day awareness initiative which takes place on Tuesday 21 September.

EFP secretary general Nicola West highlighted the links between Alzheimer’s disease and periodontitis and the growing evidence on that suggests that maintaining good gum health can have a positive effect in preventing or ameliorating the symptoms of Alzheimer’s disease.

“Periodontitis is the sixth most common human disease in humankind and negatively influences quality of life and accelerates several systemic diseases (such as diabetes and heart disease) and exacerbates their complications,” she said. “Evidence now suggests that periodontal disease may accelerate or even initiate Alzheimer’s disease.”

Prof West, professor of periodontology at the University of Bristol in the UK, has investigated these links in her own recent research.

“We think the immune system is implicated in the initiation and progression of Alzheimer’s disease and, as we age, our immune system becomes less effective,” she explained. “One major source of chronic bacterial infection in Alzheimer’s disease is the mouth. Researchers have proposed that deep-seated bacterial infection in the gum margin may ultimately pose a threat to cognitive function in the brain.

“These oral bacteria are thought to enter the bloodstream from the inflamed gums where they trigger the release of inflammatory cells which then increase the ‘leakiness’ of the blood-brain barrier. This allows bacteria and their toxins to enter the brain itself, where they can cause damage to the brain tissue.”

Prof West said that by preventing or treating gum disease with effective daily toothbrushing and professional dental hygiene, the number of bacteria in the mouth can be reduced leading to a decrease in the level of inflammation in the gums. “Current research is evaluating if the established benefit in the mouth translates to slower degeneration of the brain tissue as measured by cognitive function,” she commented.

Recent research on the links between Alzheimer’s disease and periodontitis published in the EFP’s Journal of Clinical Periodontology includes:

The winter 2018-19 issue of EFP magazine Perio Insight included an article by Nicola West and fellow University of Bristol researcher Tanya Cerajewska explaining the research on the associations between the two diseases.

The topic will also be addressed at the EuroPerio10 congress in Copenhagen next year in symposium on periodontitis and Alzheimer’s disease, rheumatoid arthritis, and cancer (Thursday 16 June, 14:30-16.00 – see EuroPerio10 scientific programme).

In June, research published by the Economist Intelligence Unit suggested that a proposed strategy in which 90% of patients with gingivitis received appropriate treatment would result in a positive return on health-service investment.

Periodontitis is present in nearly half of 35–44-year-olds and increases with age. It affects nearly two thirds of people aged over 65, which is the typical age for an Alzheimer’s disease diagnosis. “Treating periodontitis in Alzheimer’s patients would make considerable healthcare cost savings by delaying symptoms,” noted Prof West.

World Alzheimer’ Day is an international campaign to raise awareness and highlight issues faced by people affected by dementia. It takes place every 21 September and is part of a whole month of awareness activities, World Alzheimer’s Month. This year the focus is on “the power of knowledge” and on encouraging people to know the signs and symptoms of dementia so that they can get the right diagnosis and support as quickly as possible.