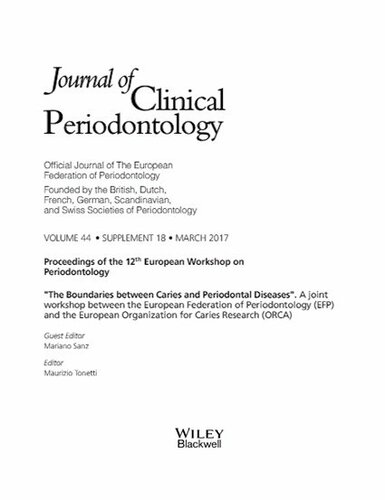 The consensus findings of Perio Workshop 2016, which explored the boundaries between caries and periodontal diseases, have been published in an open-access supplement of the EFP’s scientific publication the Journal of Clinical Periodontology.

The workshop, organised by the EFP in conjunction with the European Organisation for Caries Research (ORCA), was held in November last year in La Granja de San Ildefonso, near Segovia in Spain. It was sponsored by Colgate.

Among the key findings of the workshop were the fact that both caries and periodontal diseases share common genetic, aetiological, and environmental factors, although they follow different trajectories.

The 75 invited experts from the two organisations who took part in the workshop also found that similar preventive approaches, based around routinely performed oral hygiene with a fluoride toothpaste, are effective with both diseases.

The JCP supplement, guest-edited by Mariano Sanz, chair of the EFP’s workshop committee, comprises the consensus reports of the workshop’s four working groups, which explored different areas concerning the relationship between caries and periodontal diseases.

Working Group 1, chaired by Mariano Sanz (EFP) and David Beighton (ORCA), considered the question of the role of microbial biofilms in the maintenance of oral health and in the development of dental caries and periodontal diseases.

The JCP supplement includes the consensus report of this working group plus related articles on Dental biofilm: ecological interactions in health and disease and Role of microbial communities in the pathogenesis of periodontal diseases and caries.

The results and conclusions of this working group were:

The results and conclusions of this working group were:

The JCP supplement also includes the related review papers considered by this group: Host genetics role in the pathogenesis of periodontal disease and caries and Nutrition, dental caries, and periodontal disease: a narrative review.

Working Group 3, chaired by Søren Jepsen (EFP) and Vita Machiulskiene (ORCA), tackled the prevention and control of dental caries and periodontal diseases at the individual and the population level.

The group’s consensus report included the findings and conclusions that:

Working Group 4, chaired by Maurizio Tonetti (EFP) and Sebastian Paris (ORCA), considered age-related effects on oral health, dental caries, and periodontal diseases. Its consensus report is a “call to action to protect and enhance oral health and well-being as an essential component of healthy ageing.”

The group said that “some priorities have major implications for policymakers” because health systems will need to adapt to the challenges by introducing “system-wide changes” that enable tooth retention later in life and the “management of deteriorating oral health in increasingly dependent elders.”

Mariano Sanz, chair of the EFP’s workshop committee and guest editor of the JCP supplement on Perio Workshop 2016, said: “These disease processes have been historically analysed under very different optics and the cultures of analysing the scientific evidence by the cariologists and the periodontists was clearly well apart.

“This workshop has allowed us to identify the areas of convergence between these diseases and also the aspects in prevention and therapy which are key to both disease processes.”