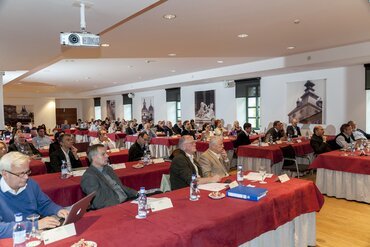 This is one of the main findings of the recent Perio Workshop 2016, organised by the EFP in conjunction with the European Organisation for Caries Research (ORCA).

The workshop’s consensus report, to be published in March, will show that similar preventive approaches, based around routinely performed oral hygiene with a fluoride toothpaste, are effective with both diseases.

It will also state that, because of global population growth and increased tooth retention, the number of people affected by dental caries and periodontitis has grown, increasing the total burden of these diseases globally, mainly in the older population.

Other conclusions of the joint workshop on the boundaries between caries and periodontal disease, which brought together 75 invited experts from the two organisations, include:

• Microorganisms associated with both caries and periodontal diseases are metabolically highly specialised and organised as multi-species microbial biofilms.

• The progression of these diseases involves multiple microbial interactions driven by different stressors. With caries, exposure to dietary sugars and the fermentation of organic acids results in increasing proportions of acidogenic and aciduric species. In gingivitis, plaque accumulation at the gingival margin leads to inflammation and increasing proportions of proteolytic and often obligate anaerobic species.

• There is moderately strong evidence for a genetic contribution to periodontal diseases and caries susceptibility, with an attributable risk estimated to be of up to 50%.

• There has been a global decline in the incidence of caries and probably periodontal diseases, although the increase in the global population and tooth retention implies a bigger burden of disease at the population level.

The workshop, sponsored by Colgate and held at La Granja de San Ildefonso, near Segovia in Spain, was organised in four working groups, which have each presented their consensus reports. These will be published in full in April in a special open-access edition of the EFP’s Journal of Clinical Periodontology.

Working Group 1, chaired by Mariano Sanz (EFP) and David Beighton (ORCA), considered the question of the role of microbial biofilms in the maintenance of oral health and in the development of dental caries and periodontal diseases.

This group reviewed the ecological interactions at the dental biofilm in health and disease, the role of microbial communities in the pathogenesis of periodontitis and caries, and the innate host response in caries and periodontal diseases.

Among its main findings were that the biofilm is an essential component involved in the development of caries and periodontal diseases. As a result, understanding the composition and inter-microbial interactions “is fundamental for developing effective preventive and therapeutic measures.”

In the same way, this working group concluded, knowledge of the microbe-host interactions involved in the maintenance of oral health and the initiation and progression of both dental caries and periodontal diseases is key to improving preventive strategies and to designing new strategies to improve oral health.

It carried out a systematic review of genetic risk factors, a narrative review of the role of diet and nutrition, and reference documentation for modifiable acquired risk factors that are common to both diseases.

The group concluded that there was moderately strong evidence for a genetic contribution to susceptibility to both periodontal diseases and caries, although the literature is more substantial for the former than for the latter. The genes involved in each are different and no common genetic variants were found.

Fermentable carbohydrates (sugars and starches) were the most relevant common dietary risk factor for both diseases, but the associated mechanisms differed. The working group also found that “functional foods” or probiotics could be helpful in preventing caries and in managing periodontal disease, although it noted that evidence is limited and that the biological mechanisms involved are not yet fully understood.

In terms of acquired risk factors for both caries and periodontal diseases, the most common are hypo-salivation, rheumatoid arthritis, smoking, undiagnosed or poorly controlled diabetes, and obesity.

Working Group 3, chaired by Søren Jepsen (EFP) and Vita Machiulskiene, tackled the prevention and control of dental caries and periodontal diseases at the individual and the population level.

Noting that the two diseases pose “an enormous burden on mankind” and that they share common risk factors and social determinants that are important for their prevention and control, the working group reviewed the current state of knowledge on epidemiology, social-behavioural aspects, and plaque control.

Key findings from this working group included the fact that the prevalence and experience of dental caries has decreased in many regions in all age groups over the last three decades, but not all social groups have benefitted equally from this fall. In addition, while some studies have indicated a possible decline in the prevalence of periodontitis, there is not enough evidence to conclude that prevalence has changed over recent decades.

Global population growth and increased tooth retention means that the number of people affected by dental caries and periodontitis has grown substantially – untreated caries by 37% and severe periodontitis by 67% between 1990 and 2013.

The most important behavioural factor for both diseases is efficient self-performed oral hygiene – tooth brushing with a fluoride toothpaste and interdental cleaning – while professional tooth cleaning, oral-hygiene instruction and motivation, dietary advice, and fluoride application are effective in managing both dental caries and gingivitis.

Over the last two decades, progress in the prevention and treatment of caries and periodontal diseases have led to better oral health and improved tooth retention in the adult population. The ageing population and the increasing expectations among older people of good oral-health-related quality of life pose big challenges to clinical care and healthcare systems.

In this context, the working group reviewed scientific evidence and developed specific recommendations to prevent tooth loss and retain oral function though the prevention and treatment of caries and periodontal diseases later in life, and to increase awareness of the health benefits of oral health as an essential component of healthy ageing.

The group found that an increase in the total burden posed by caries and periodontal diseases among the older population is a likely consequence of an ageing population, trends in risk factors, and improved tooth retention. It noted that specific surveillance is required to monitor changes in oral health in the older population and that ageing impacts oral health, including periodontitis and possibly susceptibility to caries.

Noting the evidence that caries and periodontal diseases can be prevented and treated in older adults, the group found that oral health and functional tooth retention later in life provides benefits in quality of life and in preventing physical decline and dependency by fostering a healthy diet.

In the light of these findings, Working Group 4 recommended that oral-healthcare professionals and individuals “should not base decisions impacting tooth retention on chronological age but on level of dependency, life-expectancy, frailty, comfort, and quality of life” and that health policy should remove barriers to oral healthcare for vulnerable elders.

Summing up the achievements of the workshop, Mariano Sanz, chair of the EFP’s Workshop committee, said: “These disease processes have been historically analysed under very different optics and the cultures of analysing the scientific evidence by the cariologists and the periodontists was clearly well apart.

“This workshop has allowed us to identify the areas of convergence between these diseases and also the aspects in prevention and therapy which are key to both disease processes.”