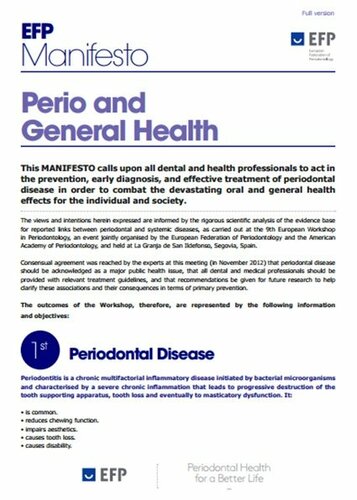 More than 450 individuals and institutions from nearly 60 countries have now signed the EFP Manifesto “Perio and General Health", an increase of 40% over the last 12 months.

The EFP Manifesto is a call to action in terms of prevention, early detection and treatment of periodontitis.

Based on the conclusions of the 9th European Workshop in Periodontology, it is the first formal declaration in international dentistry to condense years of research into the links between periodontal disease and systemic illnesses into an acknowledgement of periodontitis as a major public health issue.

The EFP invites individuals together with companies and institutions involved in health care to sign the manifesto and join a growing community of professionals and experts who want a fundamental shift in the perception of dental professionals’ responsibilities.

To date, the manifesto has attracted 456 signatories – 347 individuals and 109 companies and institutions.

In terms of geography, the UK is the country with most signatories, with a total of 66 (50 individuals and 16 companies and institutions), followed by Italy with 63, Spain with 48, and Turkey with 29.

While most signatories are based in Europe, the Manifesto has attracted support from six continents and a total of 59 countries. The list includes the USA, Australia, Canada, Brazil, Peru, Argentina, Mexico, Egypt, Saudi Arabia, Azerbaijan, India, Malaysia, and Nepal.

One of the key issues mentioned in the manifesto – the links between periodontal disease and diabetes – will be explored in depth in the forthcoming workshop organised by the EFP and the International Diabetes Federation (IDF). The Perio-Diabetes Workshop takes place in Madrid on February 19 and 20.