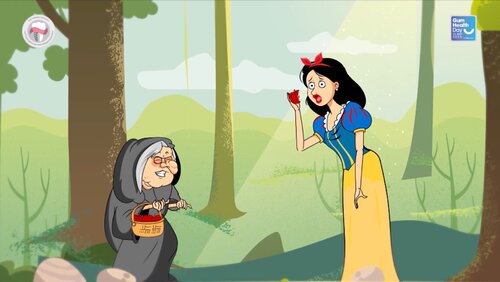 "The success of the Gum Health Day initiative is based on the enthusiasm and hard work of the national and affiliated societies, and the rest of the supporters – the EFP only provides the material, but the societies put in the energy and work to make it all happen,” said Andreas Stavropoulos, Gum Health Day 2020 co-ordinator.

The second part of our three-part guide to activities carried out for this year's 12 May awareness day looks at what national perio societies achieved in nine countries in Europe, the Middle East, and South America.

Germany: The German Society of Periodontology (DG PARO) chose to mark Gum Health Day 2020 by focusing on the links between periodontitis and diabetes. Using a play on words between zahn (tooth) and verzahnt (closely linked), it highlighted the connection between these two diseases. The society created a special landing page on its website with videos, self-testing for periodontitis and diabetes, a brochure for patients, and a glossary.

DG PARO posted the German-language version of the video Perio & Diabetes (from the EFP’s Perio & Diabetes campaign) on its Instagram page and also released on Vimeo a recording of a lecture by Prof Peter Eickholz (University of Frankfurt) on periodontitis and diabetes.

In addition, the society sent a newsletter to its members to inform them about Gum Health Day, issued a press releases to specialist and patient magazines, and placed advertising on Facebook and Instagram that led to the landing page for the Gum Health Day campaign. All society members were sent a poster about periodontitis and diabetes to display in their practices.

Greece: The Hellenic Society of Periodontology (HSP) had originally planned public events to celebrate Gum Health Day but had to pull them because of the coronavirus situation. It is now considering whether to create events in Athens and Thessaloniki in September or October if the situation allows it.

For the 12 May awareness day, the society shared EFP-produced videos and other materials via its website and Facebook page, with some of the material translated into Greek.

Ireland: The Irish Society of Periodontology distributed videos from the EFP toolkit via YouTube, Twitter, Facebook, and LinkedIn, gaining more than 6,000 views. It also provided information about Gum Health Day on its website and via the publications of dental-health organisations and their partners.

Israel: The Israeli Society of Periodontology and Osseointegration shared a humorous video with a serious message to promote the Gum Health Day 2020 theme of bleeding gums as a sign of gum disease. An animation reworked the Snow White story: instead of falling into a deep sleep at the bite of an apple, the heroine finds out she has bleeding gums. Although a prince comes to her rescue, she is told that what she really needs is a periodontist.

This video had reached 32,000 people by 25 May. The Israeli perio society was also active on Facebook, with 11 posts related to Gum Health Day, and set up a question-and-answer forum on its website, where people could ask questions to specialists.

Italy: The Italian Society of Periodontology and Implantology (SIdP) started its campaign for Gum Health Day 2020 with an interview with society president Luca Landi on national television, which it followed with videos shared on its Facebook page, which have clocked up more than 9,000 views.

As well as distributing material from the EFP toolkit, the SIdP also produced graphic material for its website for the public (www.gingive.org) and included information about Gum Health Day in an email mailing to its members.

It sent out a press release and achieved media coverage on television and in print and online newspapers, including leading national newspaper La Repubblica and the television channel Sky Tg24.

Latvia: The Latvian Society of Periodontology had originally planned to offer gum-health check-ups to the public, but this had to be cancelled because of the impact of Covid-19. Instead, it sought to reach people via its website and social media. It created its own “save the date” video for its Facebook page as well as disseminating EFP videos, graphics, and other material. In addition, the society translated into Latvian the 2020 edition of the EFP Dossier on Periodontal Diseases, which it has published on its website.

Lebanon: The Lebanese Society of Periodontology said that “although we are having a very difficult time in Lebanon due to Covid-19 and to an unprecedented economic crisis devastating our country,” it was able to release a video for Gum Health Day.

Lithuania: The Lithuanian Society of Periodontology held a live online session on 12 May with its president Jurate Zekoniene to discuss Gum Health Day. It also disseminated the EFP-produced videos and graphics for the awareness day and shared information via its Facebook page.

Mexico: The Mexican Association of Periodontology created a video for Gum Health Day which was released on its Facebook page and has been viewed around 20,000 times. The society also shared videos from the EFP-produced Gum Health Day 2020 toolkit and used the provided graphics in its social media.