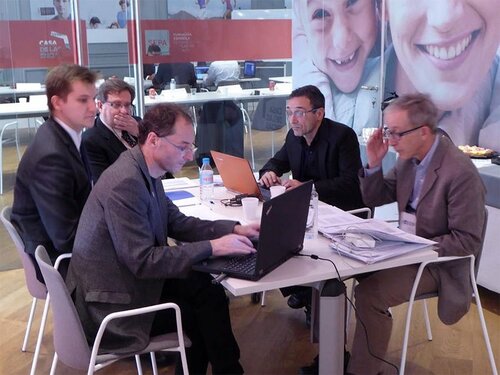 The Perio-Diabetes Workshop, held in Madrid on February 19 and 20, proved to be a successful meeting which produced a scientific consensus on the links between periodontitis and diabetes, along with guidelines for dentists, physicians, and patients.

The two-day workshop, organised by the EFP and the International Diabetes Federation (IDF) in partnership with Sunstar, involved fifteen specialists from around the world who reviewed the scientific evidence on the relationship between the two diseases.

Guidelines drawn up by the workshop include providing oral-health education to all patients with diabetes and informing them that they have a greater risk of periodontal disease which, if left untreated, could have a negative impact on metabolic control and may also increase the risk of complications including cardiovascular and kidney disease.

Patients should also be advised, the workshop recommended, that successful periodontal therapy can have a positive impact on their metabolic control and complications.

The workshop, held at the SEPA Centre for Gum Health, was jointly chaired by Mariano Sanz, professor and chair of periodontology at the Complutense University of Madrid, and Antonio Ceriello, head of the research department on diabetes and CVD at the Institut d'Investigacions Biomèdiques August Pi i Sunyer (IDIBAPS) in Barcelona and head of the diabetes project at IRCCS MultiMedica, in Milan.

“These guidelines will provide clear instructions to both dentists and physicians, as well as patients, on the appropriate management of both diabetes and periodontitis, which very frequently co-exist and have such important health implications,” said Prof Sanz.

“I am confident that this will be the first step of a very fruitful co-operation aiming to improve the quality of life of people with diabetes,” added Prof Ceriello.

The full conclusions, recommendations, and guidelines from the Perio-Diabetes Workshop will be published in the coming weeks.