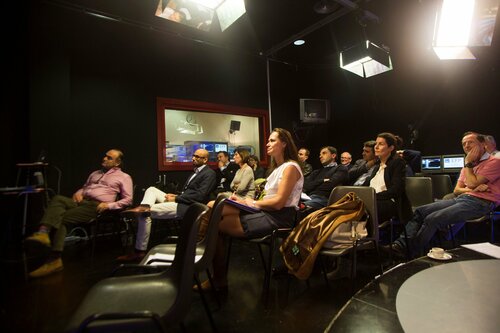 Members of the executive committee and all the EFP’s committees met in Madrid from November 7 to 9, at the Media and Health Promotion Workshop, to draw up a communications plan for 2016.

They agreed an extensive series of activities for next year, which marks the 25th anniversary of the founding of the federation. These include a periodontal awareness campaign, a roadshow that will present EFP material at meetings of the federation’s national-society members, and activities to celebrate European Periodontology Day on May 12.

They also agreed to draw up a perio health-promotion strategy and to approach the World Health Organization (WHO) with the aim of giving a presentation to officials early in 2016. This would build on last June’s meetings with members of the European Parliament in Brussels.

A key part of the EFP’s promotional strategy will be aimed at increasing perio awareness among dentists and dental hygienists and at influencing national dental associations. The campaign will also seek to increase awareness of periodontal issues among organisations working with diabetes.

The EFP is planning to give presentations to the International Federation of Diabetes, the European Society of Cardiology, and the European Patients’ Forum.

Other plans for 2016 include the launch of an online perio magazine for patients and professionals, the relaunch of the EFP Manifesto, and the issuing of guidelines for celebrating periodontal health to be given to the national societies.

The Madrid meeting took the form of a three-day workshop, in which a team of 10 media and health-promotion professionals worked closely with EFP committee members in exploring how the federation can take forward its strategic vision of ‘Periodontal health for a better life.’

The workshop’s participants were given hands-on instruction in how to handle television and radio interviews, with practical sessions at the TV and radio studios of Madrid’s CEU San Pablo University.

There were also presentations on how to prepare communications plans and outreach campaigns, how to write effectively for different interest groups, how to manage social media, how to manage institutional relationships, and how to use scientific events and meetings.

Dr Laverack emphasised the importance of addressing not only individual patients but also inequality and the social determinants of health, saying that a health-promotion strategy should be both “top-down” (telling people what to do) and “bottom-up” (finding out what people’s needs are).

He posed the question “What can the EFP do?” and highlighted five approaches that the EFP could consider as part of future activities. Laverack said that the federation could provide an expert and legitimate collective voice, help provide an evidence base, fund activities directly and directly, build a CSO (civil society organisation) network, and take part in advocacy and lobbying.

He suggested that the time was right for the EFP to take its messages about the importance of periodontal health not only to European institutions but also to the World Health Organization. This idea was received enthusiastically by the committee members and plans are now being drawn up to send an EFP delegation to the WHO in Geneva early in 2016.

The team of professionals which led the individual workshops was put together by Nítida Branding, the communications consultancy which works closely with the EFP’s external affairs committee.

“It was a great workshop and we learnt a lot,” said Mariano Sanz, chairman of the European Workshop in Periodontology who acted as chairman for the Madrid event.

“Communication is of paramount importance to the European Federation of Periodontology,” said Edwin Winkel, chairman of the EFP’s external affairs committee. “Communication is not only important in relation to the national societies and the professionals but also to the public. This workshop helped us a lot to find the best strategies for the EFP to achieve this.”

Søren Jepsen, president of the EFP, said: “This workshop has shown us how we can move forward together, with more effective communication and new initiatives in health promotion that will help us to manifest our strategic vision of periodontal health for a better life.”