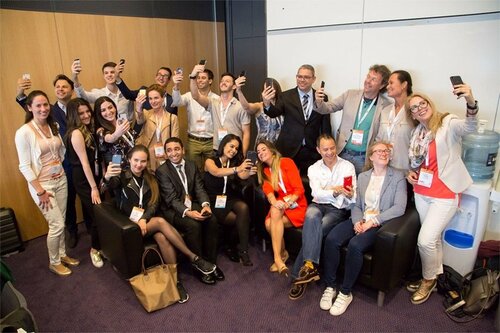 Well-attended press conferences, every session covered on social media, regular news updates, sessions and speakers photographed and videoed – the EFP communications team for EuroPerio9 put in a lot of hard and careful work to ensure that the content and atmosphere of the congress were conveyed as widely as possible.

Social media was well integrated into EuroPerio9, with a “social wall” in the exhibition hall, where Facebook, Twitter, and Instagram posts tagged “#EuroPerio9” were displayed. Scientific sessions and social events were covered by a team of 24 people led by Reena Wadia, the EFP’s social-media co-ordinator.

Over the four days of the congress, the team provided well over a hundred social-media posts.

Dr Wadia said that big challenge was editing, formatting and uploading so much content throughout the day so that everyone was kept up to date, without any major delays.

“It was great working together with such a great team and learning from each other,” she commented. “We were glued to our phones, but we managed to cover 134 speakers in the 42 sessions of the scientific programme plus provide insights into many other parts of the congress.”

She concluded: “I think we succeeded with our aim of using social media to keep everyone up to date, as well as to connect and engage the perio family.”

Three press conferences were held at RAI Amsterdam and streamed live on Facebook. The press conferences, and the 16 press releases and media alerts that were issued during the congress, were co-ordinated by Jacqueline Partarrieu, EFP media relations manager.

The press conferences and releases focused on a mixture of topics of medical and public interest – including antimicrobial resistance, the links between periodontal disease and hypertension, nutrition, sports performance, and oral piercings.

The New York Times (USA), The Times (UK), the Daily Mail (UK) and ABC (Spain) were among the newspapers that ran stories based on the releases and the press conferences, at which authors of the featured research gave brief presentations. The Reuters and ANSA news agencies also provided coverage, as did the Huffington Post, the health websites WebMD, Health Day, Infosalus (EuropaPress) and Pourquoi Docteur, and various dentistry publications and websites.

“EuroPerio9 press activities aimed to create awareness about the important research presented at the meeting, about the congress itself, and also to bring attention to key messages about oral health that the EFP is trying to spread beyond the profession,” said Jacqueline Partarrieu.

“We made a special effort to capture the attention of lay outlets so that the general public knows more about our work and how to keep gums healthy. This is an effort the EFP press office will continue beyond EuroPerio9.”

Both committees kept an eye out for research that would be relevant to both dental and general media, these topics were then “pitched” to editors and journalists, explaining to them that EuroPerio9 would be a great source of news for their outlets.

Also playing a role in media relations was Santi Quiñones, EFP communications co-ordinator, who provided support to journalists and helped organise the press conferences. He also worked in preparing the posts for social media and organising the videos and photographs that were shot over the four days of the congress.

"From the point of view of communications, EuroPerio9 was a demanding but really gratifying congress, as we achieved an unprecedented impact both directly and via our allies in the press,” said Quiñones.  “Directly, we successfully conveyed our messages online via our website, our Facebook, Twitter, LinkedIn, and Instagram pages, and our YouTube channel. And thanks to the great support of the dental press and lay press, EuroPerio9 was perceived as the major global event it really was.”

He added that the biggest challenge was “managing our three press conferences while at the same time providing a good service to the journalists and keeping our social-media pages fed in real time.”

Video editor Diego Fontecha reckons that he covered about 12 kilometres every day moving around RAI Amsterdam with his cameras.  He went from hall to hall to get some shots of the speakers and the audience, and also to try to capture something of the atmosphere of each session.

Fontecha also filmed other parts of the event including the exhibition, the poster area, the press conference, and the congress party.

As well as creating the EuroPerio9 highlights video, the material recorded will be used in promoting future events, such as EuroPerio10 (Copenhagen, 2021), and provides a repository of short interviews with key speakers that may prove useful for creating additional videos.

A key task was recording short interviews with the chairs of the working groups of the World Workshop for a forthcoming video about the new classification of periodontal and peri-implant diseases and conditions.

“I was always carrying my wheeled camera, the lighting, the mics, so I could be ready for whatever I may find on my way useful for the video,” said Fontecha.

When not filming, Fontecha was in the communications room handing material to colleague Daniel Punete Moreno, who worked on backing up and editing the material, and recharging his camera’s batteries while loading a fresh hard drive for the next bout of recording.

The official photographer at EuroPerio9 was Krisztian Juhasz from Viennamotion Digital Productions, who said that "a big convention like EuroPerio9 is always a challenge, especially because there is so much to photograph.”

In this context, good planning is a “prerequisite” and Juhasz said that “the co-operation with the EFP team and [professional congress organiser] Mondial worked wonderfully – I got a very good briefing and a well-planned list, so it was easier for me to be in the right place at the right time.”

He said that the highlights of the four days were the boat trip through Amsterdam to the speakers’ dinner at the Maritime Museum and the live surgery session that “astonished” all viewers: “It has been one of my most exciting and beautiful congresses so far, which I will remember for a long time."

News items about the sessions at EuroPerio9, with previews of each day’s scientific programme, round-ups of the press conferences, and articles on key events such as the session on the new classification were written by Paul Davies, EFP editorial and content co-ordinator, and edited by Joanna Kamma, EFP contents editor.

While social media provided the instant coverage (including posts that were online for only 24 hours), the EFP website offered full-length articles that will continue to be consulted for information about what happened at the EFP’s most successful EuroPerio congress.

In addition, Davies and Kamma had previously prepared the issues of the Perio Insight and EFP News magazines that were included in the congress bags for all participants.

The special EuroPerio9 App was managed during the congress by Marie Lechner from Mondial, who had to cope with the problems caused by WiFi bottlenecks during plenary sessions when many people were trying to access the app at the same time. Antonio Liñares, the junior officer of the EFP Communications Committee, was responsible for sending “push” notices about events at the congress to subscribers to the app.

"It is a real pleasure to head up the communications team of the EFP and their performance during EuroPerio9 was exceptional,” said Tiernan O’Brien, chair of the EFP communications committee. “For a conference as big as this we have to work closely with all of the other EFP committees and in particular the EuroPerio9 organising committee.  With so much going on and everyone with busy agendas, it can be a challenge for us to cover the relevant material – but I think we did it.

“I can only say huge congratulations and thank you to the whole team.  We have learnt a lot from this conference and hopefully will continue to build on these experiences to ensure that the EFP messages are clearly communicated to our stakeholders now and into the future."