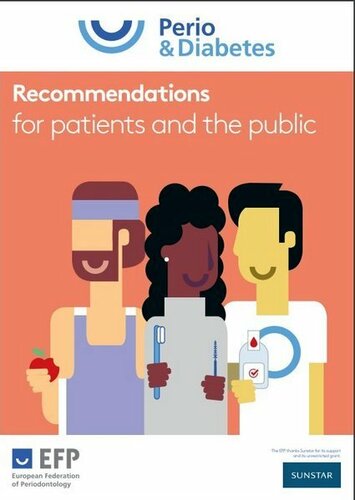 The EFP launched its latest outreach project, focusing on the relationship between periodontal disease and diabetes, on November 14, World Diabetes Day.

Perio & Diabetes, produced thanks to an unrestricted grant from EFP partner Sunstar, provides a wide range of written and graphic material based on the findings of the Perio-Diabetes Workshop, held in Madrid in February 2017.

The Perio & Diabetes project has a dedicated website (perioanddiabetes.efp.org) that includes recommendation guidelines specially produced for different audiences: dental professionals, other medical professionals, researchers, policymakers, patients and the public, and the media.

Information is also presented in the form of shorter brochures, lively infographics, and an animated video. There is also a section with frequently asked questions (FAQs).

The scientific basis of the campaign is set out in reports that explain the key findings of the Perio-Diabetes Workshop, organised jointly by the EFP and the International Diabetes Federation (IDF), in partnership with Sunstar.

The project hopes to have a major impact on healthcare by encouraging dentists and doctors to work more closely together in tackling periodontal diseases and diabetes.

There is a bidirectional relationship between the two diseases, which means that people with periodontitis have a higher risk of diabetes, while people with diabetes are three times more likely to develop periodontal disease.

The materials provided by the project include:

Filippo Graziani, the EFP president-elect who co-ordinated the project, said: “All the material for the Perio & Diabetes project is based on the findings of an EFP-organised workshop rather than based on previous knowledge. We have some amazing graphics, which are a great way to deliver the information. And, most importantly, we address all the different types of public that might be interested in this material.

“This project is important because it is based on true science: it thus increases the authoritativeness of the EFP and gives the EFP a tool to communicate to the public at large – something that we are increasingly focused on.”

Iain Chapple, EFP secretary general, commented: “We cannot underestimate the importance and impact of this project on policymakers, the public, the professions, and our patients.”

"At Sunstar, we believe in a holistic approach to health," said Marzia Massignani, the comapny's senior manager of scientific affairs and corporate communications. "For over thirty years we have supported research into the bidirectional relationship between diabetes and periodontal disease. The partnership in this project was a natural step towards fulfilling our mission of education in this field."