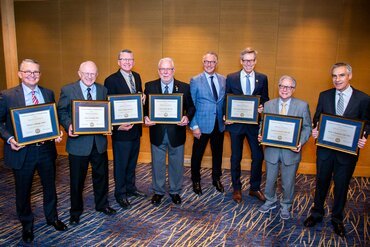 The recent annual meeting of the American Academy of Periodontology (AAP) featured a series of awards to EFP officers, including the four co-chairs of the working groups in last year’s crucial World Workshop on the classification of periodontal and peri-implant diseases.

At the AAP meeting, held in Vancouver in Canada from October 27 to 30, the AAP’s Special Citation Award was given to World Workshop co-chairs Iain Chapple, Mariano Sanz, Søren Jepsen, and Tord Berglundh, together with Journal of Clinical Periodontology (JCP) editor Maurizio Tonetti for their leadership of the workshop.

The AAP’s Clinical Research Award was given to the paper “Risk indicators for Peri-implantitis. A cross-sectional study with 916 implants”, whose co-authors include Stefan Renvert (former EFP secretary general and scientific chair of the Perio Master Clinics in Malta (2017) and Hong Kong (2019), published in the journal Clinical Oral Implants Research in February 2017.

Søren Jepsen, one of the World Workshop co-chairs, who was in Vancouver to receive the award, said: “The AAP does these ceremonies in style and I was happy to be able to represent the EFP on this occasion.  It was very interesting to observe the efforts of our AAP partners to educate their colleagues in the use of the new classification by having workshops for the educators in academia and also for the periodontists in practice. “