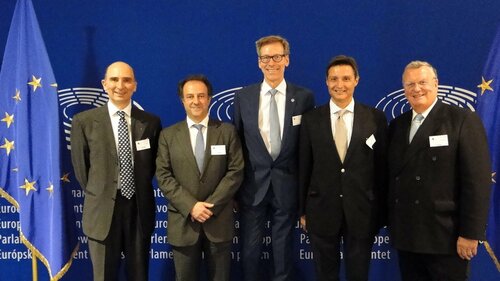 A top-level EFP delegation, led by president Sören Jepsen, visited the European Parliament in Brussels on June 17 for a packed agenda of meetings and networking in which they highlighted the importance of gum health to improving the health and wellbeing of European citizens, as well as public health in the European Union.

The EFP delegation met several MEPs, former MEPs, and policy advisors from four different political groups and eight nationalities, together with senior European Parliament officers, parliamentary assistants, networkers and journalists. Among other initiatives, the EFP delegation hosted a working lunch at the European Parliament’s 'MEPs Restaurant', where discussion focused on the relevance of gum health to public health and the value of periodontal prevention in improving both quality of life of European citizens and the cost-effectiveness of European public health and welfare systems.

The EFP officers emphasised how prevention and treatment of periodontal disease may help prevent, control, or detect diabetes and other systemic conditions at an early stage. They made the case for the relevance of gum health to oral health, general health and public health, and also presented the EFP Manifesto 'Perio and General Health' to the MEPs and policy advisors. You are invited to sign the Manifesto by clicking here.

This EFP visit to the European Parliament, organised under the supervision of EFP external affairs committee chairman Edwin Winkel, was the first of its kind and paves the way for a fruitful partnership with European policymakers and officers, laying the foundations for building a strategic relationship with key actors in the EU decision-making process.

EFP delegates, policymakers and officers all considered this pioneering visit to the European Parliament to have been a success in its own right. Future networking and co-operation provide a potentially rewarding opportunity for advancing the priorities of the EFP and the interests of periodontal and other oral-healthcare professionals across Europe.