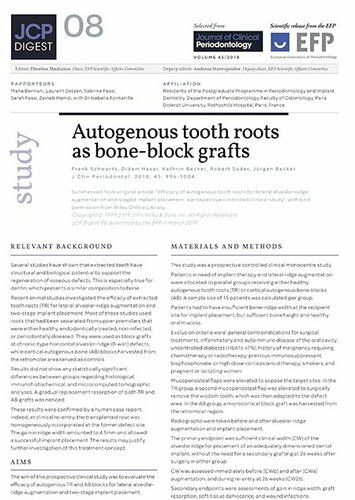 Extracted tooth roots may be considered as a therapeutic alternative to autogenous bone blocks for lateral alveolar-ridge augmentation and two-stage implant placement, according to a study now summarised for the EFP’s JCP Digest.

The prospective controlled clinical study, carried out by a team of German researchers led by Frank Schwarz, found that tooth roots were as efficient as cortical autogenous bone blocks for bone augmentation of horizontal defects, thereby allowing two-stage implant placement.

The study, published in full in the August 2018 edition of the Journal of Clinical Periodontology, was summarised for JCP Digest by students of the postgraduate programme in periodontology at Paris Diderot University in France.