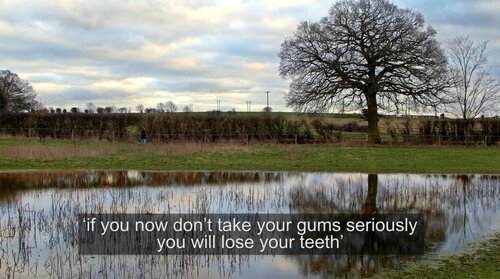 The EFP-funded documentary film The Sound of Periodontitis: The patient’s view of gum disease received its world premiere on June 3 at the EuroPerio8 congress in London, giving centre stage to the perspective of patients.

This 10-minute production follows four patients who talk about their experiences of periodontitis, peri-implantitis and periodontal treatment.

“It started off with a burning sensation in the gums and my bad breath used to terrify me,” says Angela Chatterton, one of the featured patients. “I couldn’t talk about it because the problem was caused by my poor oral hygiene, so I felt shame. I wasn’t speaking up as much as I would have done with a cancer condition.”

Another patient, John Phillips, recalls his initial diagnosis: “Even when I got told I had gum disease I didn’t think it was anything serious because I didn’t realise that if your gums get bad then your teeth will actually start dropping out.”

As a result of his diagnosis and treatment, Julian Ekiert now has a totally different attitude to oral health. “I now regard my dental hygiene as one of my key daily activities – it’s as important to me as going to my gym in the morning,” he says.

His wife, who has also been treated for gum disease, adds: “It’s actually much more widespread than you realise, which in a way is quite reassuring but also suggests that there is something that needs to be done.”

After the film’s screening at the ExCeL London conference centre, three of the four patients took to the stage to participate in a lively discussion and Q&A with the audience.

The session was chaired by Simon Denegri, an international leader in public engagement in healthcare and research, and also featured Julie Rosse, a past president of the British Society for Dental Hygienists and Therapists, and Professor Ian Needleman, who chaired the video project’s working group and who will become president of the British Society of Periodontology in 2017.

“The film explores the experience of what it is like to live with the condition and the treatment journey”, said Needleman. “The aim of the film is to deliver fresh insights into the substantial negative effects of periodontal disease and the beneficial, life-changing effects of treatment.”

He added that these insights would help enhance both more effective communication with patients and lobbying in Europe to promote the prioritisation of periodontal health.

The documentary’s title is not a homage to a well-known 1960s musical film starring Julie Andrews but rather expresses the desire to challenge the notion that periodontitis is a “silent” disease.

Filmed in different locations across the UK, the video tells highly personal stories though the patients’ own voices and perspectives. It covers three areas: the effect of the condition and diagnosis, the experience of treatment, and the beneficial impact of treatment on health and well-being.

The film was produced by the Media Trust (an award-winning professional documentary producer) with funding from the EFP. The project was led by the University College London (UCL) Eastman Dental Institute, the British Society of Periodontology, and the British Society for Dental Hygienists and Therapists, with support from the UCL Public Engagement Unit. Click here to see the full version of the documentary.

The documentary – available in two versions, with and without English subtitles – represents a leap forward EFP communications and the inclusion of the patient perspective is a significant innovation. The Sound of Periodontitis will be made available through the EFP to the national societies and also via the EFP’s YouTube channel to the public at large.