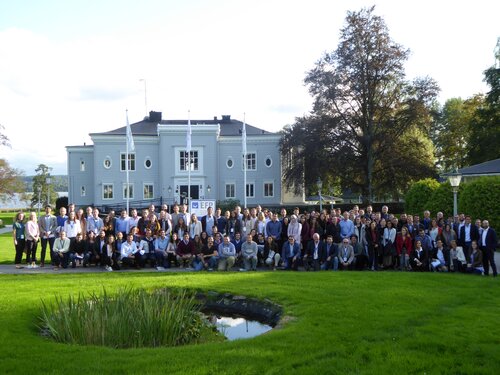 The past year has been a crucial one for the evolution of the European Federation of Periodontology.

Above all, it has been the year when the EFP truly became the leading global force in periodontal science and clinical practice.

Not only did the federation stage its first event outside Europe (the highly successful Perio Master Clinic 2019 in Hong Kong) but it also welcomed its first six non-European members. And Gum Health Day on May 12 was a truly global event.

As EFP president Filippo Graziani puts it: “This has been an exciting year, and we have delivered a lot for the dental community – particularly with the New Classification toolkit and the Perio Workshop on guidelines for treating periodontitis. And we have also done a lot behind the scenes, working to make the EFP more efficient and to create a leadership culture and a new strategic plan.”

Looking back on the year, highlights include:

January: EFP publication Perio Insight published an important article on the links between periodontal disease and Alzheimer’s Disease by University of Bristol researchers Tanya Cerajewska and Nicola West, which outlined the latest evidence on an association between the two diseases and the need for more research into the nature of this association.

February: Together with the World Heart Federation, the EFP staged the Perio & Cardio Workshop, which brought together leading medical and periodontal experts to consider the latest evidence on the associations between periodontal and cardiovascular diseases and develop recommendations on tackling them. The consensus report of this workshop will soon be published in the Journal of Clinical Periodontology and forms the basis of the Perio & Cardio outreach campaign – like the workshop, sponsored by EFP partner Dentaid – which is due to be launched in March 2020.

March: On March 1 and 2, the EFP held its first event outside Europe: Perio Master Clinic 2019 in Hong Kong, brought together 550 clinicians from 41 countries (with the strongest representation from China, Hong Kong, and Japan) to listen to presentations from leading clinicians on the prevention and treatment of soft- and hard-tissue defects in relation to peri-implantitis.

It was in March that the EFP’s general assembly (in Bern, Switzerland) welcomed the first international associate members to the federation – the societies of periodontology of Argentina, Australia, Brazil, Lebanon, Mexico, and Taiwan. At the general assembly, a new team took the helm at the EFP: with Nicola West replacing Iain Chapple as secretary general and Monique Danser succeeding Joerg Meyle as treasurer. Filippo Graziani became president for 2019-20, following Anton Sculean.

April: The EFP launched its toolkit for clinicians on the new classification of periodontal and peri-implant diseases, which comprises guidance notes and presentations from the EFP experts who helped draw up the classification.

May: Gum Health Day on May 12, with the slogan “healthy gums, beautiful smile”, was an intercontinental success with activities taking place in at least 47 countries, organised not only by EFP member societies but also by the Ibero-Panamerican Federation of Periodontology (FIPP) and other national societies.

June: The first issue of a new-look JCP Digest, the EFP’s research summary, covered an important topic for clinicians: the use of antibiotic prophylaxis when placing implants.

July: In an extensive interview, new EFP secretary general Nicola West outlined her priorities and discussed the federation’s international strategy, its projects with partners, the new classification of periodontal diseases, and the importance of communications, saying how she is “continually looking at ways to raise and improve the profile of the EFP.” During July, the “core” executive committee of the EFP met in Belgium to review strategy and draft a new strategic plan.

August: The EFP released the first set of videos for its toolkit on the new classification, in which project co-ordinator and chair of the EFP workshop committee Mariano Sanz emphasises the importance of the new classification and gives a step-by-step guide to the staging and grading of periodontitis cases.

September: The eighth EFP Postgraduate Symposium took place in Gothenburg, Sweden, bringing together a hundred students and 32 teachers from the 17 EFP-accredited programmes in periodontology. Topics covered in the student presentations included the new classification, bone-augmentation techniques, and the relationship between periodontal risk and nutrition.

October: The EFP executive committee met in Split, Croatia, to focus on topics including the new strategic plan, the federation’s projects with its partners, and the campaign for EU-wide recognition of periodontology as a dental speciality.

November: Perio Workshop 2019, held in Spain, brought together 90 experts to develop an evidence-based guideline on periodontal therapy, which will provide dentists with precise therapeutic pathways and recommendations on specific interventions to treat periodontitis.

December: The EFP was pleased to announce the Perio Master Clinic 2020 was already fully booked. The event, the fourth EFP master clinic, takes place in Dublin, Ireland in March 2020 and is devoted to the challenges of hard- and soft-tissue aesthetic reconstructions around teeth and implants.