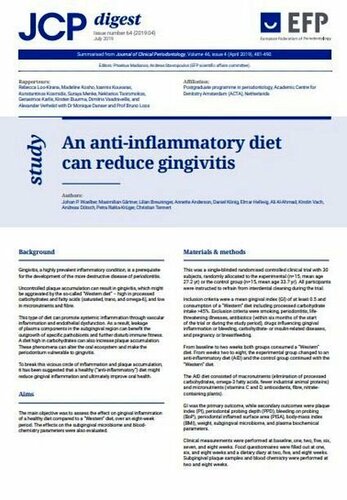 People who eat an “anti-inflammatory diet” rich in fruits, vegetables, nuts, and fish are less likely to have gingivitis – that’s the conclusion from research summarised in the latest edition of JCP Digest.

JCP Digest No. 64 offers a précis of an eight-week randomised controlled trial to evaluate the influence of an anti‐inflammatory diet on different parameters in patients with gingivitis.

Researchers at the Department of Operative Dentistry and Periodontology at the University of Freiburg (Germany), divided 30 patients into experimental and control groups. The experimental group changed to a diet low in processed carbohydrates and animal proteins, and rich in omega‐3 fatty acids, vitamin C, vitamin D, antioxidants, plant nitrates, and fibres for four weeks. The control group did not change their diet. Both groups suspended interdental cleaning during the study.

However, there were no differences between the two groups in terms of plaque values, inflammatory serological parameters, serological omega fatty acids, or the composition of the subgingival microbiome.

Researchers concluded that, within its limitations, the study “showed that gingivitis is profoundly affected by diet” and that gingival inflammation can be reduced by changing to a plant-based, whole-food diet.

Noting that a healthy diet might play a role in boosting the host immune system and in reducing inflammatory reactions to dental biofilms, they suggested that “dietary advice could therefore be included in gingivitis treatment.”

The full study, published in the April edition of the JCP, has already had some impact in the general media. It was summarised for JCP Digest by postgraduate students at the EFP-accredited programme in periodontology at the Academic Centre for Dentistry Amsterdam (ACTA) in the Netherlands.