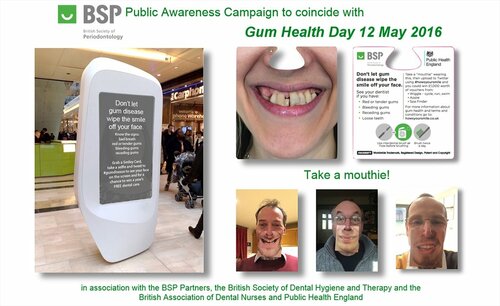 The British Society of Periodontology (BSP) will carry out a public-awareness campaign in a London shopping centre during the week around May 12, the day designated by the EFP as European Day of Periodontology which will be celebrated across Europe.

Almost two years in the planning, the campaign includes a large LCD billboard which will run a shock video about gum health, using the slogan “Don’t let gum disease wipe the smile off your face.”

The BSP’s “Gum Health Day” campaign aims to raise awareness of gum health and achieve behavioural change by encouraging people to visit their dentists to check for gum disease.

A key component of the campaign involves the distribution of small square cards which have information and advice about gum disease on one side and striking photographs of periodontally compromised mouths on the other.

The top of the cards is cut away to allow them to be attached to the nose as a kind of mouth mask. The BSP is encouraging dental professionals and the public take photographs of themselves wearing these masks and is offering prizes for the best “mouthie”.

The society has printed 90,000 of these mouth cards and will distribute them not only during the shopping-centre event but also at the Dentistry Show in Birmingham on April 22 and 23, as it seeks to build momentum for the campaign.

The campaign is supported by the BSP’s partners (Johnson & Johnson, GSK, Dentsply, Philips, Oral-B, and Henry Schein), and by the British Society of Dental Hygienists and Therapists, the British Association of Dental Nurses, and Public Health England.

‘Exciting time’ for the BSP

The plans for Gum Health Day were unveiled at the BSP’s Spring Conference, which took place in Oxford from April 7 to 9. Addressing the conference, Dr Ower said: “This is a very exciting time for our society and I think we are genuinely entering a new era.  Three years ago we started developing an ambitious strategic plan and we are now delivering on this.”

He highlighted the BSP’s new website, its new logo and its strengthened relationships with partners (“without whom we could not be doing all the things that we are now doing and are planning to do in the future”) as important achievements.

He also mentioned the updated Good Practitioners Guide which is made available to all dental practitioners, regardless of whether they are members of the BSP.

“I was delighted when Randy Nesse accepted my invitation and he put me in touch with another advocate of this concept, Aubrey Sheiham,” said Ower.

“Aubrey – an iconoclast and one of the most influential and insightful dental professionals of our times – was instrumental in helping plan the programme and would have chaired the first day. But he passed away suddenly and unexpectedly late last year. So we have dedicated this conference to Aubrey’s memory.”